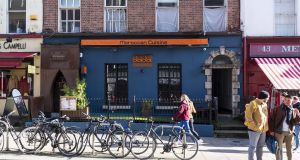 In what is being billed as a “test of the market”, agent QRE Real Estate Advisers is guiding a price of €2.6 million for a mixed-use investment opportunity in Dublin city centre.

The property is at the junction of South William Street and Chatham Row and just 170m from Grafton Street. Its basement and ground floors are let to Dada Moroccan restaurant at an annual rent of €123,000 under two coterminous leases, both of which are due to expire in April 2030.

The upper floors comprise eight studio apartments, all of which are available with the benefit of vacant possession. The studios are in varying condition and will require refurbishment prior to letting. In addition, there are three small offices and workshops, which increase the existing rent roll to about €138,000 per annum.

The guide price reflects a net initial yield (allowing for standard purchaser’s costs) of about 4.82 per cent, prior to the letting of the eight vacant studio apartments, for which the estimated rental value is believed to be about €145,000 per annum.

Bryan Garry, director of investment at QRE says: “This landmark building will provide an investor with a genuine value-add opportunity by way of refurbishment of the upper floors to high-quality residential accommodation. We expect 44 & 45 South William Street to be of strong interest to investors and developers seeking to provide much-needed residential stock in a truly prime Dublin city centre location.”

1 Why are markets booming when a crash is on the way?
2 How much do Irish people earn? And what will Covid-19 do to our wages?
3 Dunnes Stores trials online ordering from Cornelscourt outlet
4 Could your old car be giving away all your secrets to its new owner?
5 Permission sought for €150m film and media campus in Wicklow
6 Up to 400 jobs saved in Cavan as MML takes stake in CG Power Systems
7 Innovation hubs keen to get show back on the road
8 AIB U-turn on mortgage block for those on Covid wage subsidy
9 Covid-19: Publicans and restaurateurs row over calls for VAT cuts
10 Government committed to finalising roadmap for safe overseas travel ‘shortly’
Real news has value SUBSCRIBE