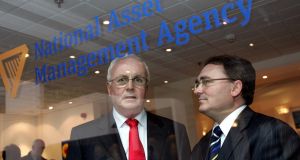 What was Project Eagle?

Project Eagle was the name given to the National Asset Management Agency’s (Nama) Northern Ireland property loans, sold to US company Cerberus in April 2014 for about €1.6 billion.

How did Nama get the loans?

Nama bought the loans in 2010, along with thousands of others, from Irish banks, which needed to be rescued following a property market crash and financial crisis in 2008.

Who owed the money originally?

What did selling the loans mean?

The sale gave Cerberus the right to collect the full amount due on the loans or take control of the properties against which they were secured. It was the biggest property transaction in Northern Ireland’s history.

So two people face fraud charges connected with the deal?

They are Frank Cushnahan, a well-known figure in Belfast business circles who was a member of Nama’s Northern Ireland Advisory Committee, and Ian Coulter, former managing partner of law firm Tughans.

Tughans advised Cerberus and before that, another US firm, Pimco, an unsuccessful bidder for the loans.

Both men knew each other. Lawyers for each man say their client maintains he is innocent.

How did all this come about?

Controversy over Project Eagle blew up in 2015, when it emerged that Coulter transferred €7 million in fees from the deal to an Isle of Man bank account without Tughans’ knowledge. He resigned as managing partner once this was discovered. At the time, the then independent TD Mick Wallace claimed in the Dáil that politicians and business people were to benefit from the sale.

This prompted the NCA investigation in the North. In the Republic, the Dáil’s Public Accounts’ Committee and the Comptroller and Auditor General (C&AG), the State’s financial watchdog, began their own inquiries.

What did these investigations find?

It emerged that Pimco had agreed to pay a £15 million sterling (about €17 million at the time) “success fee” to Tughans, US law firm Brown Rudnick and Cushnahan if its bid succeeded.

However, Pimco dropped out of the auction in March 2014 after Nama discovered that Cushnahan had been advising the US firm. Cushnahan had resigned as a member of the agency’s Northern Ireland Advisory Committee the previous October, after he knew that Nama intended selling the loans.

Cerberus, which emerged as the winning bidder after Pimco’s exit, hired Tughans and Brown Rudnick in the closing stages of the auction.

So the former Nama adviser was involved in the deal?

Nama and Cerberus denied that Cushnahan was involved in the winning bid, even though the US firm hired the same lawyers with which he was to share the success fee. Cerberus formally assured Nama that no one currently or previously connected with the agency was involved in its bid. However, BBC Northern Ireland’s Spotlight programme recorded Cushnahan claiming that the money transferred to the Isle of Man was intended for him.

Nama always said that the advisory committee of which Cushnahan was a member had no decision-making powers and was there simply to advise.

What else emerged from the investigations?

That Cushnahan and Coulter had approached Brown Rudnick partner Tuvi Keinan in 2012 with a proposal to sell all Nama’s Northern Ireland-linked loans to a single buyer. Keinan approached Pimco, which then contacted Nama in 2013, shortly before Cushnahan resigned from the advisory committee. Nama offered the loans for sale in January 2014. However it invited bids from interested parties rather than simply approaching one potential buyer.

Did the State get a good deal from the sale?

The C&AG report estimated that Nama could have sold the loans for €220 million more and criticised its handling of the revelation that Cushnahan was advising Pimco. However, the agency argued that the comptroller got its calculations wrong.

What is Nama saying?

Nama did not comment on news that the two men were to face charges. However, throughout the investigations, the agency, its chairman Frank Daly and chief executive Brendan McDonagh always argued that the sale had been conducted properly, that it reacted appropriately when Cushnahan’s link to Pimco emerged and that it got the best price possible at the time.