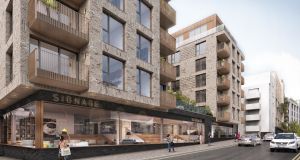 A computer-generated image of the One Lime Street scheme as seen from the junction with Hanover Street East.

Pat Crean’s Marlet Property Group has secured €65 million in development finance from AIB to fund the construction of One Lime Street, a new scheme of 216 apartments it is delivering in Dublin’s south docklands.

News of the deal comes just two months after AIB decided to provide Marlet with a €33 million loan to finance the development of up to 142 apartments at its Walled Garden scheme at Dundrum in south Dublin.

One Lime Street will comprise a mix of 216 one- and two-bedroom units. The development will have a concierge service, and be complemented by an onsite gym, multipurpose rooms and retail space at street level. It will also include some 13,000sq ft of landscaped communal space.

The Walled Garden meanwhile will feature a mix of one- and two-bedroom apartments, along with 2,149sq m (23,132sq ft) of public open space including a play area, seating and pond features.

While the units at both schemes will be aimed primarily at serving the demand for accommodation at the upper end of Dublin’s private rented sector (PRS) market, a portion of the apartments at the Walled Garden will be set aside for social housing.

Commenting on AIB’s decision to finance the development of One Lime Street Marlet chief executive Pat Crean said: “We are delighted that AIB has supported us again in a demonstration of confidence in our approach to development. We are pleased to be able to commence on delivering these badly needed, quality homes in one of the last available sites in the ‘Silicon Docks’ area of Dublin city centre.”

AIB’s head of development finance, Derek O’Shea said: “AIB is committed to playing a vital role in home building in Ireland. The funding of the delivery of high-quality, sustainable homes is strategically important to AIB and as such myself, Brian Motherway and the wider development finance team are delighted to support Marlet in the development of One Lime Street.”