Prime business district in Dublin has vacancy rate near 20% 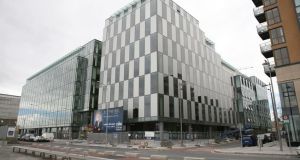 Riverside at Sir John Rogerson’s Quay, Dublin. While high-end tech and financial companies may be moving into Dublin 2, many have large space requirements which may not fit the specifications of what is available

Despite reports of strong demand for office space in the centre of Dublin, Dublin 2, one of the city’s core business districts, has a commercial vacancy rate of more than 18 per cent, significantly above the national average, according to new research by property database GeoDirectory and DKM Economic Consultants.

The surprise finding suggests there is a serious mismatch between the available stock and what is being demanded.

GeoDirectory chief executive Dara Keogh said while there was a string of media reports about high-end tech and financial companies moving into Dublin 2, many had large space requirements which did not fit the specifications of what was available.

GeoDirectory ’s analysis of 102 locations, including 80 towns across the four provinces plus 22 Dublin postal districts, revealed that despite the emergence of a sustained economic recovery since 2014, commercial vacancy rates remain stubbornly high in many parts.

It showed that most of the 15 towns with the highest commercial vacancy rates – those in excess of 20 per cent – were either based along the west coast or in the midlands.

“This continues the trend that we have seen in previous editions of GeoView, where the east is outperforming the west, although vacancy rates remain stubbornly high across the board,” said Annette Hughes, director of DKM.

Nationally the study shows 28,784 of the 212,717 commercial address points in the Republic were vacant in the second quarter, which equates to a national vacancy rate of 13.5 per cent.

Kerry, which has consistently had a low vacancy rate over the past number of years, again had the lowest commercial vacancy rate at 10.6 per cent , albeit this was up from 9.4 per cent last year.

Ballybofey in Donegal was the town with the highest vacancy rate at 28.8 per cent, followed by Edenderry (Co Offaly) with a vacancy rate of 27 per cent.

Only two counties recorded decreases in the same period, Dublin (-0.2 per cent) and Leitrim (-0.1 per cent).

1 Covid-19 has shown that much of ‘normal’ life should have been binned years ago
2 Johnny Ronan loses out in court battle on 13-storey docklands plan
3 ‘Lockdown lobby’ needs to explain why this time would be different
4 New hotel planned for Dublin’s Liberties
5 Pfizer to seek FDA approval for Covid-19 vaccine in November
6 Looking to postpone your tax payment? Revenue sets December deadline
7 Irish retailers are not hotbeds of Covid-19 infection, figures suggest
8 Irish regulator probes Facebook's handling of children's data on Instagram
9 Budget 2021: fuel prices rise and high-emission cars hit
10 Number of houses for sale falls to 14-year low
Real news has value SUBSCRIBE