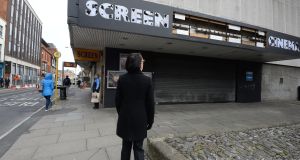 The owner of the former Screen Cinema site in Dublin has agreed that a restriction on its title preventing its use as a cinema or theatre until 2036 will also apply to any successor in title, the High Court heard.

Pat Crean’s Balark group, which bought the site in 2016 from the Dublin Cinema Group (DCG), owners of the Savoy Cinema, is asking the court to strike out DCG’s proceedings over the matter. Balark claims the proceedings are a “stone in the shoe” to future development of the site. Balark has planning permission to redevelop the Hawkins Street cinema site and adjoining College House to include 157,000sq ft of offices with a 500-seat “entertainment venue”.

The site was bought from Dublin Cinema Group by Balark Investments, which later transferred its interest in the properties to Balark Trading GP.

DCG brought High Court proceedings last year after it failed to get undertakings from Balark not to use it as a cinema/theatre in accordance with a 20-year restrictive covenant contained in the 2016 sale agreement. DCG’s Savoy Cinema in O’Connell Street is just up the road from the Screen site.

On Tuesday, Balark applied to Mr Justice Michael Twomey to strike out or stay the DCG case. That application was opposed by DCG.

Following talks, Brian O’Moore SC, for Balark, said his clients were prepared to clarify and accept the restrictive covenant “runs with the land” to the successors in title. They were also prepared to report to the DCG side any ongoing sale to ensure a purchaser will also respect the covenant.

There remained primarily the issue of whether the DCG proceedings can be allowed to affect the development of the site based on a “phantom concern” of DCG, counsel said. Given that DCG had dropped its claim in relation to the application of the covenant, it did not make any sense to prevent construction of the new premises going ahead through these continuing proceedings, he said. It was now an “unsustainable” claim and bound to fail, he argued.

Micheál O’Connell SC, for DCG, said the undertakings given following talks on Tuesday had fundamentally changed what had been the clearly stated position of the defendants up until then. Mr O’Connell said he would begin his arguments in relation to the outstanding planning permission issue, “which is really a breach of covenant issue”, when the case resumes on Friday.