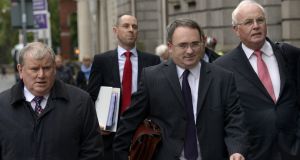 Nama executive Ronnie Hanna played a key role in forcing US company Pimco out of the Project Eagle bidding race – after details of a £15 million “success fee” emerged, a report shows.

Project Eagle was the name given to more than 900 loans secured on properties in Northern Ireland, the UK and Republic, that Nama sold in April 2014 to US firm Cerberus for £1.3 billion.

A report into the sale, by Comptroller and Auditor General (C&AG) Séamus McCarthy, shows that Mr Hanna, Nama’s head of asset recovery, initially alerted its board that another bidder, Pimco, had agreed to pay the £15 million fee to former Nama adviser Frank Cushnahan, Belfast solicitors Tughans and US lawyers Brown Rudnick, which they were to split equally.

Mr Hanna became embroiled in the Project Eagle controversy when Mr Cushnahan, a former member of Nama’s Northern Ireland advisory committee, was recorded claiming that the pair had a strong relationship.

In the recording, broadcast on a BBC Northern Ireland’s Spotlight programme, Mr Cushnahan claimed he had used his influence with Mr Hanna to ensure Nama did not appoint receivers or liquidators to some of its Northern Ireland-based borrowers.

Mr Hanna, who subsequently left Nama, has never commented on the claims while the agency maintains that this was not possible.

Minutes of Nama board meetings and conference calls, between Mr Hanna and Pimco in March 2014, show he told the US company the agency was concerned about the deal with Mr Cushnahan.

Mr Hanna indicated the bid might proceed if Pimco dropped the success fee deal, but the company replied that this was not possible and withdrew its offer in March 2014.

Tughans and Brown Rudnick switched sides to Cerberus, whose bid was then poised to succeed, and agreed a similar fee deal with that company.

Nama subsequently learned of that arrangement in April.

The agency only agreed to sell Project Eagle to Cerberus on the basis that the company assured Nama it was not paying any of its current or former executives or advisers to work on its bid.

It says Nama should have sought advice from the compliance unit of its parent body, the National Treasury Management Agency; spoken to its agent on the sale, UK investment bank Lazards; and sought an explanation from its former advisor.

While he moved the money back, he resigned once the firm learned of the transaction.

He and Mr Cushnahan had worked together on a plan to arrange a sale of Nama’s Northern Ireland interests to a single buyer and to seek a success fee if a deal was done.

Mr Coulter attracted the interest of both Pimco and Cerberus through contacts with Brown Rudnick.

The following autumn, the firm told Nama it was interested in buying the Northern Ireland loans, prompting the agency to auction them as Project Eagle.

Nama says the C&AG’s report confirms that Mr Cushnahan had no impact on the outcome of the sale.