Naas retail park at Newhall complex on N7 for sale with guide price of €21.5m 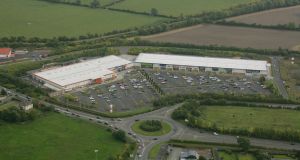 Newhall is currently producing a rent roll of €1,562,942 with additional funds due in the form of turnover top-ups on two of the seven businesses now trading there.

One of the two retail parks in Naas, Co Kildare, the successful Newhall complex at junction 10 of the N7 Dublin-Limerick motorway, goes for sale today at a guide price of more than €21.5 million. The other park, The Globe, was bought two years ago by Green REIT.

Domhnaill O’Sullivan of Savills is handling the sale of Newhall which will give new owners an immediate return of 7.63 per cent with the prospects of increasing rental income in the short term.

The park is currently producing a rent roll of €1,562,942 with additional funds due in the form of turnover top-ups on two of the seven businesses now trading there.

With the retail market rapidly recovering in top provincial towns such as Naas, Newhall should have little difficulty in finding a tenant for one vacant unit but in the meantime the vendor is prepared to underwrite the rent for a period of up to two years.

Newhall was developed in 2005 by Grangemount Holdings, and has eight retail warehouses with an overall floor area of 13,504sq m (145,366sq ft) and 660 car parking spaces laid out in two adjoining L-shaped blocks.

As part of this process, the rent reverted to open market values at the time but with business rapidly picking up there is obviously scope for rental growth in the medium term.

About 88.5 per cent of the rental income comes from B&Q, Harvey Norman, Halfords, Carpetright and DSG, trading as PCWorld/Currys.

The new owners will also have an opportunity to broaden the appeal of the park by availing of planning permission to develop three further retail warehouses with an overall floor area of 2,230sq m (24,000sq ft) on a two-acre site at the southwest end of the park.

Newhall greatly benefits from its close proximity to the 230-acre Millennium Park where a range of top companies are based including the Kerry group which is developing a €100 million global technology and innovation centre which will employ more than 900 people when fully commissioned.

The other big players in the park are State Street, the offices of Lidl, Allied Irish Banks and GEA Process Technologies.

Mr O’Sullivan says that “every dial on the retail economy dashboard is now pointing towards a robust economic expansion.” Newhall Retail Park would present investors with the opportunity to capitalise on this recovery and gain a foothold in one of the fastest-growing towns.

Savills says Newhall is the “dominant” park in Naas in terms of floor space and tenant profile. The Globe has a retail area of 12,077sq m (130,000sq ft) including a vacant unit. The tenants are Woodies, Maxi Zoo, Expert, Harry Corry, EZ Living, Smyths Toys and Heatons.