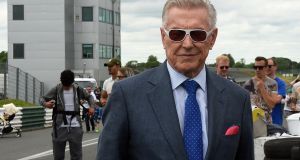 Martin Birrane, a property developer and owner of the Kildare motor racing track Mondello Park, passed away suddenly at the weekend aged 82.

Mr Birrane ran both UK-based property business Peer Group, and Lola Cars. He was well-known in the Republic as the owner of Mondello Park, which he bought and revitalised in the 1980s.

Originally from Mayo, Birrane emigrated aged 17. He went first to England, but moved around, spending time in Geneva, Switzerland, before going to Canada, where he got his first taste of the property business.

He returned to Britain in 1960 and began working on his own real estate business. In 1983 he became chairman of property developer Peer Group, taking a majority stake in the company.

At that time, Peer Group’s assets were £2 million sterling. By the end of 1996 they were £70 million and are now worth about £190 million. In 1985 he engineered Peer’s game-changing purchase of the Hop Exchange, on the south bank of the Thames, close to London Bridge.

In 1986 he bought Mondello Motor Racing Circuit in Co Kildare. He spent heavily on redeveloping the venue and opened its 3.5km international circuit in 1998. It remains the only Federation Internationale de l’Automobile-licensed track in the State.

His love of motor sport prompted Mr Birrane to buy racing car maker Lola Cars in the 1990s. He then worked on broadening its business into other areas such as aerospace.

Mr Birrane wasn’t just a motor racing fan – he competed successfully himself in various classes. In 1990 he set the Irish land-speed record on an unopened stretch of Dublin’s M50 motorway.

He is survived by his wife, Susan, whom he marred in 1958, along with children Lis, James, Bridget and Amanda, and five grandchildren.

Student accommodation sector set for harsh Covid-19 lesson 05:30
Want to help the coronavirus recovery? Go shopping 05:13
Major credit union plans to limit savings accounts to €40,000 05:00
Bad posture working from home easy to acquire 05:00
Wild Geese: ‘I love to introduce and inspire people of all ages to the mountains and cliffs’ 04:05