US investment company agrees to pay €68m for centre in Blackrock 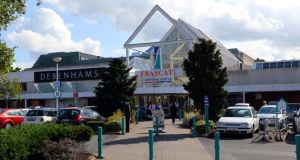 Ownership of yet another Dublin shopping centre is about to change hands. Invesco, the American investment management company, has agreed to pay in the region of €68 million for the Frascati Shopping Centre in Blackrock, Co Dublin, which is in line to be extended and upgraded.

A number of other funds including Irish Life and Green REIT are believed to have shown interest in the centre which is fully occupied and trading exceptionally well.

Invesco’s acquisition of the centre is subject to the approval of the Competition and Consumers’ Protection Commission.

An additional 15 stores to be provided on two levels at the front of the centre running out towards the Blackrock bypass and Mount Merrion Avenue will include at least one substantial restaurant. A new basement level will facilitate additional on-site car parking.

Frascati has never had any difficulty finding traders because of the relative prosperity of the area and its convenient location off the main route into the city. However, it is generally acknowledged that to retain its visitor numbers the centre needs a greater variety of traders, although it is acknowledged that it will never be in a position to challenge the huge fashion offering at Dundrum Town Centre.

Other prominent traders include McDonald’s who pay a rent of about €200,000 and Peter Mark hairdressing who contribute close to €100,000.

Frascati was developed in the late 1970s by the Roche family of Roches Stores fame amid considerable controversy over its decision to demolish the home of Lord Edward FitzGerald, the 1798 United Irishmen leader. The Roche family sold its business to Debenhams in 2006.

Frascati is located opposite the Blackrock Shopping Centre where Superquinn traded for many years and where SuperValu now operate a large supermarket.

Friends First held a 34 per cent stake in the centre for a number of years and moved in 2014 to buy out the remaining 66 per cent stake from Musgrave Operating Partners Ireland. The investment is believed to have cost them about €50 million.