The company bought the building near Grafton Street for €7.8m and revamped it 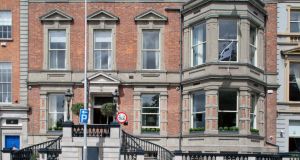 The global insurance company XL Group has moved its Dublin-based insurance and reinsurance teams, as well as its corporate staff, into the refurbished former Hibernian United Services Club on Dublin’s St Stephen’s Green. The listed Georgian building is one of the most prestigious business addresses in the city.

It was sold to the company over a year ago for €7.8 million after the former Anglo Irish Bank appointed a receiver to a development company controlled by its owner, the late Hugh O’Regan. He had originally bought the former gentleman’s club at the peak of the property bubble for €10 million and spent almost as much again on upgrading it with the intention of reopening it as a club for “young and emerging businessmen and women”. That ambition ended with the property crash.

The four-storey, redbrick building dates from 1795 and occupies a prominent position on the north side of St Stephen’s Green, close to the top of Grafton Street.

Dublin-based RKD Architects handled the conversion of the building into a modern headquarters which has an overall floor area of 2,322sq m (25,000 sq ft).

XL’s chief executive officer Mike McGavick said moving into the building marked a “great day” for XL as it allowed the company to have all its Dublin-based staff under one roof.

Justin Treacy, director at RKD Interiors, said their vision was to design a 21st century office building supporting the requirements of XL while respecting the sensitive nature of the protected structure.

“Design detail, materials and workmanship had to be of a standard that would be commensurate with the generous spaces of the original building. Working areas are treated in a contemporary manner while meeting spaces are designed to reflect the Georgian architecture with modern detailing.”

He said a restrained but tailored approach to materials and colour was used throughout to reflect both the XL brand values and the original architectural detail. “A spectacular repurposing of one of the most important buildings on St Stephen’s Green has been achieved. The project represents a celebration of the old and the new and we hope the building will serve XL for years to come.”

XL had been based at 1 Hatch Street after changing its domicile to Ireland from the Caymen Islands. The company has total assets of $45.4 billion (€35bn).