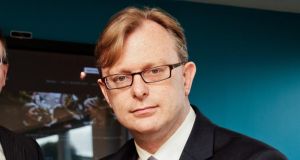 Well-known Belfast law firm Tughans said Ian Coulter (above) was involved in the sale by Nama last year of a portfolio of loans with a nominal value of €5.7 billion, which were sold for €1.6 billion.

One of the leading business figures in Northern Ireland, Ian Coulter, was named on Friday as the partner who left a Belfast law firm in a dispute over allegedly “diverted” fees linked to Nama’s largest asset sale.

Well-known Belfast law firm Tughans said Mr Coulter was involved in the sale by Nama last year of a portfolio of loans with a nominal value of €5.7 billion, which were sold for €1.6 billion. Most of the loans were linked to property in Northern Ireland. The loans were bought by US private equity firm Cerberus Capital Management in a sales process called Project Eagle.

In the Dáil on Thursday, Independent TD Mick Wallace raised concerns about the sale and said a routine audit of Tughans at the time found an Isle of Man bank account containing £7 million (€9.8 million) that was “reportedly earmarked for a Northern Ireland politician or political party”.

The chairman of the Northern Assembly’s finance committee, Sinn Féin’s Daithí McKay, said he will convene an emergency sitting to examine the allegations and expects to call Mr Wallace and representatives of Cerberus, Tughans and Nama.

On Thursday night, Tughans said a former partner had “diverted to an account of which he was the sole beneficiary” professional fees due to the firm. It said the partner had since left, the matter had been reported to the Law Society of Northern Ireland and the money had been retrieved.

On Friday, Tughans named Mr Coulter and confirmed it and he had worked on Project Eagle.

Tughans said it had been retained by a major US law firm representing Cerberus. “The firm’s position is that no part of its professional fee is payable or will be paid to any third party, politician or adviser.”

Mr Coulter could not be contacted for comment and the Law Society investigation is ongoing.

Cerberus said it was “deeply troubled” by Mr Wallace’s statements and wanted to make it clear “no improper or illegal fees were paid by us or on our behalf and we take any allegation to the contrary extremely seriously”.

It said it never engaged Tughans. “We appointed Brown Rudnick as our lawyers. We were advised by them that they would be seeking local counsel support in Northern Ireland by Tughans and that they would be paying Tughans out of their fees. Cerberus has never paid Tughans.”

Tughans said it would await the outcome of the Law Society’s inquiry before “deciding which other agencies should be notified”. The society said it did not comment on whether it was conducting particular investigations.

Nama said nine global investment groups were invited to bid for Project Eagle and Cerberus emerged as the preferred bidder.

It also said it sought and received confirmation from Cerberus that no fee was payable by it to any person connected with Nama in relation to any aspect of the sales process.