The Coast on Baldoyle Racecourse grounds has 53 homes, 41 of them occupied rentals 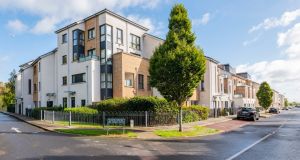 The Coast, Baldoyle, Dublin 13. The homes benefit greatly from their proximity to Clongriffin Dart station and Dublin Bus service.

A portfolio of 53 houses, duplex units and apartments built 12 years ago in the coastal suburb of Baldoyle, Dublin 13, is to be offered for sale in a single lot.

Savills is guiding €13 million for the homes in the grounds of the former Baldoyle Racecourse, which are to be sold on the instructions of receiver Tom O’Brien of Mazars. All but 12 of the 53 homes are occupied and producing a rental income of €655,000. The vacant units have been retained by the selling agent to either allow them to be sold directly to new owners or leased at higher open market values once they have been refurbished.

Savills estimates that the full estate in The Coast has the potential to bring in rents of more than €1 million, leading to a highly attractive reversionary yield of over 7.5 per cent. The portfolio has a mixture of 18 one-bedroom apartments, 16 two beds and seven four-bedroom homes.

According to Savills, the homes offer exceptional value to investors attempting to gain a foothold in the Dublin leasing market or planning to expand an existing portfolio.

The Baldoyle homes benefit greatly from their proximity to Clongriffin Dart station and Dublin Bus service, which are both within easy walking distance. Baldoyle is also within 5km of the M50/M1 interchange.

Dessie Kilkenny of Savills, who is handling the sale, said suburban residential investments were the focus of a variety of investor types who want to capitalise on the favourable sector conditions.