Five Dublin Georgians selling together or in two lots 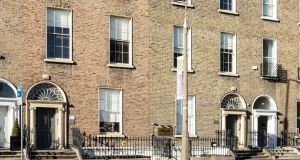 Five fully occupied Georgian houses in Dublin’s south inner city are to be offered for sale in one or two lots through joint agents Murphy Mulhall and Cushman & Wakefield.

The Viscount collection, assembled by a private investor based in London, includes numbers 38 and 39 Lower Leeson Street and, a short distance away, 17, 18 and 19 Fitzwilliam Street.

The two interconnecting houses on Lower Leeson Street are expected to attract offers over €5.15 million, giving them a capital value of €493 per sq ft and a net initial yield of 6.2 per cent. The four-storey over-basement houses have a mixture of offices and apartments, an overall floor area of more than 970sq m (10,444sq ft), and currently produces an annual rent roll of €346,300.

The agents are seeking in excess of €4.3 million for the three interconnecting four-storey over-basement Georgian houses on Fitzwilliam Street, which produce a rent of €227,500. The net yield will work out at 4.87 per cent after the deduction of standard acquisition costs. The three houses are in office use at basement, ground and first-floor levels, while the upper floors have been converted into six apartments: two three-beds, one two-bed and three one-beds.

The agents said they expect strong interest in the portfolios from a mix of local and international investors looking for a “hands on” asset management opportunity. The Georgian investment market continues to attract strong demand underpinned by rising rents and robust occupier demand.

The sale of the five Georgian houses is being handled by Clive Roche of Cushman & Wakefield and Brian Gaffney of Murphy Mulhall.