Housing development in South Dublin will be a priority, says new owner 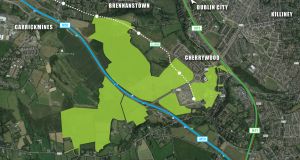 Map of the €280m site at Cherrywood

Building apartments and houses is the “immediate priority” for a multibillion euro global property group that bought a 400-acre site in Cherrywood, South Dublin.

The US-based Hines group has completed the purchase of the Cherrywood Business Park and development scheme from receivers working for the National Asset Management Agency and a number of banks.

Hines was previously reported as being the top bidder with an offer in the region of €280 million.

The 400-acre site has approval for the construction of a new, retail-led mixed use town centre with up to 3,800 apartments and houses.

It also has zoning capacity to expand what is already the second-largest office park in Dublin to three times its current size.

“We are acutely aware of the urgent need for large-scale housing development in Dublin and our first priority will be to work in collaboration with Dún Laoghaire-Rathdown County Council to accelerate the delivery of major infrastructure within the development,” said Brian Moran, senior managing director with Hines Ireland.

“We aim to deliver houses and apartments into the market as quickly as possible.”

Mr Moran said that, while basic infrastructure had to be put in place before residential and other property could be built, the first residential property on the site could be finished within 18 months.

The Cherrywood site is on both sides of the M50 and is the terminus for the Luas Green Line service. It will be a major focus for housing and commercial development in Dublin over the coming years.

The Hines group has been involved in three major master-planned developments in Europe in the past decade in France, Spain and Italy.

It is a family-owned property group with controlled assets of approximately €22.6 billion in 18 countries. It already owns property in the Liffey Valley shopping centre, Spencer Dock, and Bishop’s Square, all in Dublin.

The group has now invested more than €500 million in equity into Irish property, with an additional amount of borrowing being used to buy property that is now believed by the group to be worth approximately €1 billion.

The group usually invests with partners, with the partner in the Cherrywood venture being a US hedge fund, King Street Capital.

Mark Reynolds, from Savills, the estate agents that handled the deal for receivers Grant Thonton, said the sale represented a development opportunity of scale that was unlikely to be repeated in Dublin again. Cherrywood was likely to be a priority location for development in the city in the coming years, he said.

The estate agents believe the rent roll from Cherrywood is likely to increase in the coming years as lettings increase, with the current rent roll of €7.5 million per annum expected to grow to approximately €10 million.

Cherrywood was originally a project of the since-collapsed Liam Carroll property group.

The site already already has more than 520,000 square feet of rented offices, retail and leisure buildings, and car parking, with tenants who include Dell Direct, Covidien, Friends First and Elavon Financial Services. Cherrywood was placed in receivership in July 2014 by creditors who included Nama, Danske Bank and Lloyds Banking Group.