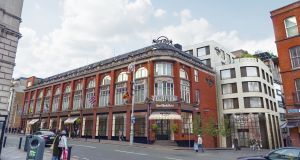 A computer-generated image of the new Hard Rock Hotel, which Tifco plans to open in Dublin in 2020.

Irish hospitality group Tifco is bringing the Hard Rock Hotel franchise to Dublin as part of a €30 million development.

Tifco plans to open an upscale 120-bedroom, four-star hotel under the Hard Rock brand in early 2020, with the hotel set to have a “subtle” music bent.

Located on Lord Edward Street, opposite City Hall, the hotel will comprise two buildings – the red brick Exchange Buildings, which date from 1912 and was previously the location for the Parliament Hotel, and the adjacent Fashion House Building, which is being rebuilt and will provide the entrance and reception. A new glass link bridge will connect the properties.

Speaking to The Irish Times, Tifco’s chief executive Enda O’Meara said he was “really excited about” securing the Hard Rock franchise, adding that the new hotel would “stand out from the crowd” in Dublin. “It’s a terrific location . . . [and] our early sales activity has been encouraging,” he said.

Mr O’Meara said the ground floor would have a “cool food and beverage” offering, while there will be live music each night and the hotel will also have a Rock Shop, selling rock’n’roll memorabilia.

Tifco owns the buildings and will operate the hotel as a franchise from Hard Rock International. This will be the first Hard Rock hotel in Ireland although there has been a Hard Rock Cafe in Temple Bar since 2004. The restaurant recently reopened after an extensive refurbishment.

Tifco has engaged Douglas Wallace as interior designers and is planning to create a “unique music-inspired city escape with priceless memorabilia adorning the interior of the property”. It will use “warm fumed woods, fresh stone surfaces, bespoke Ulster carpets and sumptuous patterned and vibrant fabrics”.

To help with the rock and roll theme, guests will be offered complimentary vinyl players and records in their rooms. They can also order a Fender guitar for an in-room jam session, complete with an amp and headphones.

Mr O’Meara expects rooms to be priced at €200-plus, with a near 1,000sq ft “Rock Star Suite”, complete with access to a rooftop garden, likely to attract a premium price. “We hope to get some of the rock stars that come to the city to play to stay there,” he said.

Commenting on the project, Todd Hricko, senior vice president and head of global hotel development for Hard Rock International, said: “Ireland has always been a place close to our hearts, and it only seems right to open a Hard Rock Hotel in Dublin, given the city’s musical roots. This is an exciting opportunity to extend our presence in Europe.”

Tifco is one of Ireland’s largest hotel groups with 24 hotels, with a combined 2,423 bedrooms. Its portfolio includes Clontarf Castle in Dublin, the Hilton Hotel in Kilmainham, The Metropole in Cork and the Travelodge chain of 12 properties. The company employs 1,500 staff and has annual turnover of about €70 million.

Hard Rock International has venues in 75 countries, including 182 cafes, 24 hotels and 11 casinos.