Nuritas to rent office block next to Mansion House 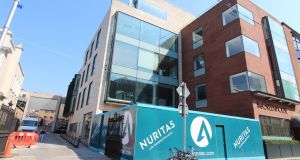 Pioneering biotech start-up company Nuritas is relocating to Dublin’s Dawson Street, where it will occupy the Joshua House office block next to the Mansion House.

The five-storey over-basement building is owned by Dublin City Council and has a net internal area of 1,486sq m (16,000sq ft). The 20-year lease includes a break option in year 10.

The firm, which is advised by Keith O’Neill of BNP Paribas Real Estate, data mines molecules in food and food byproducts to identify supplements and new drugs. Nuritas says it can find these peptides 10 times faster and 500 times more accurately while significantly reducing costs.

Nuritas has already developed and patented health improving ingredients that address global challenges across as broad a spectrum as inflammation, diabetes, ageing and MRSA.

Some of the early funding for the project was provided by U2’s Bono and The Edge as well as Salesforce chief executive Marc Benioff. The company also linked deals with global giants such as BASF and Nestlé in 2017.

Emmet Browne, former European regional president of Pfizer, has been chief executive since 2015.