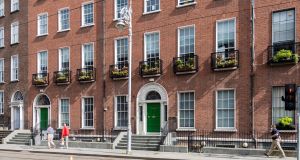 Those looking for a pandemic-proofed combination of secure and immediate income along with strong reversionary potential over the longer term will be drawn to the sale of 76-78 Harcourt Street in Dublin 2.

Let in its entirety to the Office Public Works, the building is being offered to the market by agent Savills at a guide price of €21 million.

Located within a short walk of St Stephen’s Green and overlooking the Iveagh Gardens, the investment briefly comprises an office block of 24,490sq ft distributed over lower ground and ground floors plus four upper floors.

While the property features a modern extension, it has maintained its Georgian facade, in keeping with the buildings surrounding it. There are 24 under-croft car parking spaces.

76-78 Harcourt Street sits on a site of 0.3 acres with a portion of this underutilised providing redevelopment opportunities for the prospective purchaser.

The property was first let to the Office of Public Works (OPW) in January 1982 on a 35-year lease. The current rent is low at just € 37.70 per sq ft, giving a net initial yield of 4.37 per cent but with strong reversionary potential. The next rent review is due in January 2022.

Fergus O’Farrell of Savills says: “76 - 78 Harcourt Street presents an opportunity to acquire a prime office investment with ‘AAA’ State income over the next six years and potential redevelopment opportunities.”

The investment is well located within Dublin’s central business district. The Harcourt Street Luas green line stop is situated almost immediately outside the entrance to the property, while the city’s prime shopping thoroughfare, Grafton Street, is just a short walk away.

Harcourt Street itself is poised for major redevelopment over the coming years with planning permission granted to Hibernia Reit earlier this year for an enlarged office development on the site of An Garda Síochána’s Dublin regional headquarters.

Construction of the 343,000sq ft Harcourt Square scheme is expected to get under way in January 2023, after about 500 gardaí staff based on the premises move to the new € 80 million Garda command and control centre on Military Road near Heuston Station. Quite apart from its provision of grade A office accommodation, Hibernia Reit’s development will include a new townhall large enough for conferences and functions of more than 600 people, as well as food and beverage and fitness facilities.