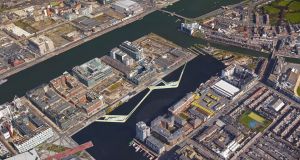 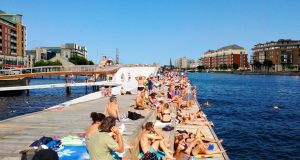 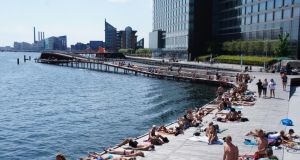 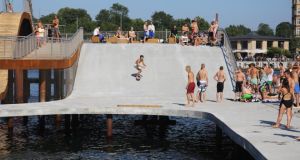 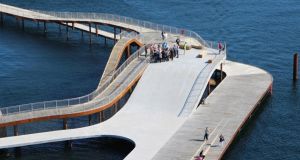 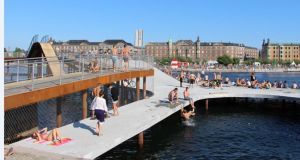 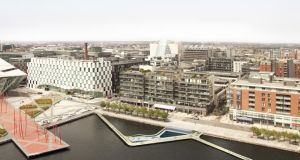 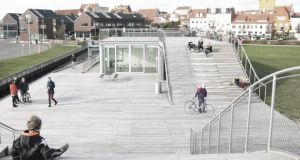 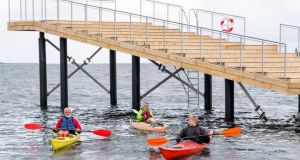 Reclaiming riverfront and underused port areas for leisure (think Paris-Plages) is a growing trend as European cities and towns come to see harbour bath projects as an engine of economic renewal and a means of bringing identity and focus to urban areas.

“Dublin has some ideal locations for harbour bath projects,” says Maxime Laroussi, director and cofounder at architects Urban Agency. “South-facing parts of Grand Canal Dock and in front of the Convention Centre on the north quays are perfect.”

The former Dublin Docklands Development Authority commissioned JDS architects to devise an urban baths project for Grand Canal Dock. This would have connected Hanover Quay with the rear of the Dublin Bus garage site on Ringsend Road. However, like many boom-era projects, it hadn’t gotten off the ground when the crash came.

Urban Agency, meanwhile, has been involved in a number of baths projects on the Continent. Principal among these are two in Denmark: Kalvebod Waves in Copenhagen and the Faaborg harbour baths.

Kalvebod Waves, which cost about €4 million, is located in a once-gloomy part of the city’s harbour that has been transformed into a busy leisure location. Its two main piers are in shadow-free zones and act as “islands” on the water. The project then reconnects these islands to the quay, creating two inner water-basins for water sports.

“On the ‘waving’ pier, visitors can explore the waterfront from different levels and enjoy the views,” says Laroussi. “The development invites visitors to take a walk or boat tour, rent a kayak in the kayak-hotel, enjoy a coffee in the container shops, or simply sit and enjoy an exciting and active public space.”

Kalvebod Waves is a steel, timber and concrete structure of some 4,000sq m (43,056sq ft) that is secured by piles. Because much of the structure was precast, it only took about three months on-site to build.

Locals use it for running, cycling, skating, sunbathing, diving and kayaking. It includes a ladder so people can get out of the sea easily.

Faaborg’s harbour baths, which was completed in 2014 and covers 2,000sq m (21,528sq ft), is an undulating collection of three piers with a floating swimming pool at its heart. There is a sauna for winter swimmers and changing rooms. It is designed to tie the city and sea closer together while offering multiple ways to approach the water.

“The idea was not to create specific zones for this or that activity,” says Laroussi. “We wanted a loose place for public life to unfold, the unexpected to happen. In other words, a place that people can adapt in their own ways.”

Perhaps the best example of this is how skateboarders jump off into the sea after gathering speed down an incline. This appears to be a fashionable activity, given that gangs of teenagers spend their summer weekends videoing themselves hopping off Dún Laoghaire’s East Pier into the harbour.

Interestingly, the long-awaited redevelopment of Dún Laoghaire’s derelict Victorian baths seems to be gathering pace. According to Dún Laoghaire-Rathdown County Council, the project has been granted permission. Tender documentation is “currently being prepared and it is expected that works will commence on site in early 2017 and be completed in the third quarter of 2018”.

The project will redevelop the baths building for a cafe and artists studios, while a new walkway will pass through the site to connect with the East Pier and Sandycove Green. A jetty will also be built to provide access to the sea for swimmers and a landing point for canoes and kayaks. The old swimming pools will be covered in.

Meanwhile, a €2.75 million urban beach proposed for Dún Laoghaire harbour is “currently on hold pending organisational restructuring, and we hope to have it back in planning next year for opening in 2018”, according to one of its joint funders, Dún Laoghaire Harbour Company.

The beach, which has been approved by An Bord Pleanála, is modelled on Berlin’s Badeschiff project. It will include a cafe and artificial beach at the East Pier, alongside a floating river barge containing a swimming pool with heated, treated seawater.