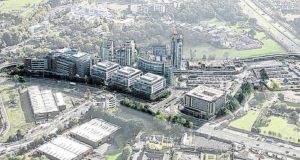 Property investor Green REIT will consider further development at the high-profile Central Park commercial complex in south Dublin it and a multinational are poised to buy in a €310 million deal.

Green and US real estate giant Kennedy Wilson are in pole position to acquire the office and apartment blocks in Leopardstown after the National Asset Management Agency named them as preferred bidders, although the Irish property company said in a statement there is no certainty of a deal going through.

Their bid trumped offers from private equity players Blackstone, which came in at below €310 million, and Lone Star, which was just under €300 million. It was 24 per cent more than the €250 million guide price sought by Nama when the agency put Central Park up for sale in early November.

There is scope to develop a further 700,000sq ft of office space in three blocks at the site. It is understood Green will consider doing this, assuming the deal goes through.

Kennedy Wilson is believed to be solely interested in the residential element, which consists of 272 apartments with space for more. Bewley’s Hotel and a creche also have buildings there, but these are not part of the deal.

Central Park generates an overall rent roll of €17.97 million, due to increase to €19.32 million once a number of rent-free periods expire.

It is the biggest property Nama has put on the market to date.

Galway developer John Lally’s Devano Developments is responsible for the apartment complex. That company is not in receivership, but Nama is managing most of Mr Lally’s bank loans.

Green REIT issued a statement yesterday, confirming reports Nama had selected it as a preferred bidder. The company became the first real estate investment trust to launch on the Dublin market when it raised €310 million from its flotation in June. Part of its plan is to cash in on revived demand for high-quality office space in the capital.

Meanwhile, Kennedy Wilson will use some of the £750 million from its planned launch on the London Stock Exchange to invest in “distressed” properties in the Republic. Reports yesterday stated it will invest in “opportunistic and distressed real estate in the UK, Ireland and Spain”.