Site can be used for a variety of purposes – residential, retail, offices and car trading 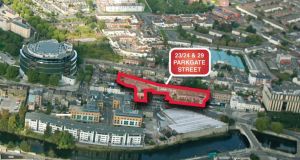 The former Gowan Motors buildings near the entrance to the Phoenix Park at Parkgate in Dublin 8 seems set to be redeveloped following its sale to a private investor for €2 million – €200,000 above the guide price.

Tim Scannell of Lambert Smith Hampton handled the sale of the mixed-use site of 0.31 of a hectare (0.77 of an acre) and 23/24 and 29 Parkgate Street which previously traded as Gowan Motors and a CIÉ transport depot.

The complex with substantial road frontage includes a motor showrooms as well as a workshop, two-storey office building and a forecourt together with an extensive two-tier car park to the rear with a capacity for holding more than 70 cars.

Only the motor showrooms and ground floor retail unit are in use and yielding a rental income of €67,500.

The site has a particularly high profile on Parkgate Street, one of the busiest streets in the area, because of its close proximity to the transport hub at Heuston Station, the Guinness Brewery, the new Criminal Courts and the Phoenix Park.

Under the current Dublin City Development Plan, the site can be used for a variety of purposes including a mixed-use scheme with uses ranging from residential, retail, offices and car trading.