Ghost cities a symbol of slowdown in China’s property market 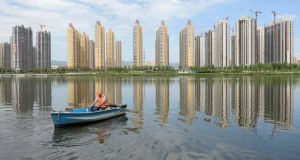 Ghost estates were one of the hallmarks of the property downturn in Ireland; in China, ghost cities are becoming emblematic of the slowdown hitting the real estate market here.

While real estate investment slowed to 12.5 per cent in September, down from 13.2 per cent in August, local governments in Chinese cities rely on income from land sales to boost their exchequers, and there has also been a housing market boom in many of China’s cities.

Earlier this month, a Beijing business newspaper published a “ghost town index”, which took a government standard measure that says cities should have 10,000 people per square kilometre. If a city is only half full, ie if it has 5,000 people per sq km, or a ratio of 0.5, then it qualifies as a ghost town.

Using this measure they found at least 50 ghost cities in China.

In some cases the measure seems odd – Lhasa, the capital of Tibet, had a ratio of 0.28, a level of emptiness which is hardly surprising given it is one of the least accessible cities in the world.

Erlianhaote, in the desert of Inner Mongolia, is about 7 per cent full, while the holiday destination of Sanya, on the tropical island of Hainan in the south, is 40 per cent full.

An interesting graphic in the business magazine Caixin shows just how cities were busy frantically adding to their territory last year.

Between 2008 and 2012, the total urban area of cities in China expanded by 9,700km, which is the equivalent of 50 cities the size of Wenzhou in Zhejiang province.

During that period, the three cities that added the most urban area were Suzhou, which added 209sq km, Chongqing, which added 355sq km, and Dongguan in Guangdong province, with an extra 206sq km.