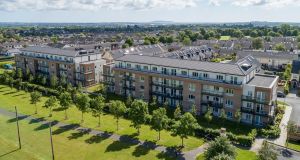 Cedar Place is located 1.6km from the Pavilions shopping centre in Swords and 12km from Dublin city centre

A real estate fund managed by Deutsche Bank subsidiary DWS has paid about €145 million to acquire a portfolio of 317 residential units the MKN Property Group is developing in Dublin.

The deal, which is understood to have been completed in recent days, will see DWS secure ownership of the Prestige portfolio, a mix of existing and new-build apartments and houses distributed across four schemes in the north Dublin suburbs of Swords, Raheny, Clontarf and Killester.

The €145 million price tag equates to an average of €457,413 per unit, and represents the largest private rental sector (PRS) or build-to-rent deal to complete this year. The joint agents handling the sale, Hooke & MacDonald and Savills, declined to comment on the transaction when contacted by The Irish Times.

While the majority of the Prestige portfolio’s units are in the process of construction with final phased practical completion by October 2021, DWS stands to secure an attractive return on its investment. The German fund is expected to earn more than €8 million in annual rental income once the units are delivered and fully-let.

The Prestige portfolio comprises 86 existing apartments at the Cedar Place scheme in Swords, and a total of 231 units under construction across the MKN Property Group’s schemes at Strand View in Raheny, Verville in Clontarf, and Brookwood Court in Killester.

Completed in 2013 and 2016, the development is located 1.6km from the Pavilions shopping centre in Swords and 12km from Dublin city centre. While the units are producing gross rental income of €1.59 million per annum, there is potential for that figure to grow by up to 20 per cent according to the prospectus prepared for the sale.

The Verville scheme meanwhile comprises 73 high-end apartments consisting of 21 one-bedroom units, 41 two-bedroom units and 11 three-bedroom units, nine of which are contained within a restored building. Located on the much sought-after Vernon Avenue in Clontarf, the scheme which is due for completion in the second quarter of 2021 carries a gross estimated rental value of €2.09 million per annum.

The sale of the Prestige portfolio represents the third major transaction in the Irish investment market involving a fund managed by DWS. In May of last year, the German-headquartered investor agreed to pay €108 million to acquire 214 apartments being developed by the Cosgrave Property Group at the Fairways in Dún Laoghaire, Co Dublin, while in June 2018 it acquired Westend Retail Park in Blanchardstown from Green Reit for €147.7 million.