Apartments, close to Ranelagh and Donnybrook, expected to be completed by 2018 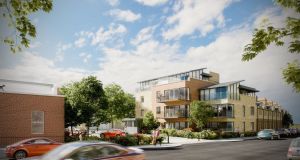 The development will be strongly orientated to the river Dodder, where a pedestrian greenway is to be built along the bank from Clonskeagh Bridge to Donnybrook

Gannon Homes has begun site preparation work for a development of 98 apartments overlooking the river Dodder in Clonskeagh, Dublin 6. The three-acre site, formerly occupied by Smurfit Paper Mills, is accessed beside Ashton’s pub and will have a landscaped courtyard with direct views over the river, weir and tree-lined banks.

The new homes will be larger than usual, 78 of them two-bedroom units and the remaining 18 will have one-bedroom layouts.

There will be 14 penthouses in all and study facilities with many of the two-beds. The four-storey building will be set back at penthouse level and finished mainly in brick and glazing to maximise river views.

The overall scheme, designed by Conroy Crowe Kelly Architects and Urban Designers, and approved by both Dublin City Council and An Bord Pleanála, will be strongly orientated to the river, where a pedestrian greenway is to be built along the river bank from Clonskeagh Bridge to Donnybrook.

The apartment scheme, close to both Ranelagh and Donnybrook villages, is expected to be completed by 2018 and, although selling prices have not yet been set, it is thought likely that they will range from €600,000 to €700,000-plus.

In the meantime, Gannon is planning to embark on a high-quality refurbishment of 13 houses it owns close by along Clonskeagh Road before putting them on the market later this year.

The launch of the Clonskeagh scheme will bring to seven the number of housing sites currently being developed by Gannon Homes, most of them in north Dublin.