Seán Mulryan says group has also paid back RBS, KBC and other institutions 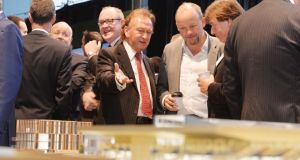 Seán Mulryan of Ballymore Group at the launch of the proposed development of Dublin Landings. Photograph: Alan Betson

Staff at Irish property developer Ballymore were told last week that the company had exited Nama, having repaid €3.2 billion in gross debt to the State agency since 2010.

In a note to employees, Ballymore founder Seán Mulryan said the property group exited Nama on December 21st, having made a final debt repayment and having satisfied its obligations under its so-called Connection Management Agreement with the agency.

Mr Mulryan said Ballymore completed a total gross debt repayment to Nama of about €3.2 billion over the six-year period, which he described as a “staggering achievement” and one that the company “should be very proud of”.

In addition, Mr Mulryan said Ballymore had paid back “significant borrowings” to RBS, KBC and other institutions, to bring its total group debt repayment to about €4 billion.

He thanked staff for their contributions and loyalty, which he said helped Ballymore achieve a “remarkable turnaround”.

“Although there is still a lot of work to do and many projects to be delivered upon, we have just achieved something exceptional together,” he said.

When appearing at the Oireachtas banking inquiry last year, Mr Mulryan said Ballymore had total debts of €2.4 billion at the end of March 2009, of which just under €2 billion was related to Irish banks that transferred loans to Nama.

Its biggest lenders were Anglo Irish Bank at just under €1.2 billion, Allied Irish Banks at €400 million and Irish Nationwide Building Society at €288 million.

The difference between the figure owed in 2009 and the sum repaid to Nama reflects interest payments, and interest paid on new loans advanced by Nama to help the property company complete development projects.

An auditor’s report lodged with the Companies Office earlier this year for Ballymore Properties, an unlimited company in Ireland, stated that it had external borrowings of just under €1.2 billion at the end of March 2016 and relied on the support of its financiers, principally Nama.

Ballymore would have been one of Nama’s biggest debtors and it is probably the largest group to have successfully exited the agency.

In October, Ballymore unveiled plans for an ambitious €700 million development in Dublin’s docklands that will include office and retail space, and 273 apartments.

Called Dublin Landings, it will be located on a 2.35 hectare site on North Wall Quay. Ballymore has partnered with Singapore’s Oxley Docklands Quay Limited on the project.

As part of its exit agreement with Nama, Ballymore is building out Piper’s Hill in Kildare and Royal Canal Park in north Dublin. It is also believed to be looking at working with the agency to build homes on Nama sites in Dublin, Kildare and Wicklow.