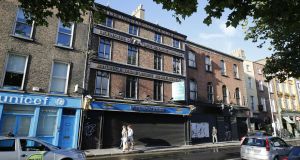 A fund connected with US investment group Oaktree Capital Management has acquired the former Zanzibar hotel on Dublin’s quays and intends to seek permission for more than 100 bedrooms on the site as part of a €45 million investment.

Targeted Investment Opportunities ICAV, a regulated investment vehicle here, has acquired the property with a view to delivering a Locke aparthotel on the site.

Locke is a lifestyle concept of SACO, which owns, operates and manages a portfolio of more than 1,000 apartments across the UK with another 1,200 under development across Europe.

Zanzibar was acquired in late December for more than €10 million, roughly double the €5 million asking price.

This followed a bidding war for the site, with estate agent CBRE receiving more than 20 offers for Zanzibar, which was previously part of the Capital Bars group run by brothers Liam and Des O’Dwyer.

“We like the potential of this specific area... and see it making a mark in lifting the area. We want to create loads of co-working space so people can come and hang out there, grab a coffee, grab a drink and spends a few hours working on their laptops. We’re looking to be a local hub for the local community. We’ll probably partner with a local food and beverage provider that understands the locality so we can create the type of area where people will come and spend five or six hours.”

Locke opened its first aparthotel on London’s Leman Street in Aldgate last year, consisting of 105 studios and 63 one-bedroom suites. A second one is due to open in Edinburgh early this year.

Mr Jafari described the concept as “lifestyle hotels meets Airbnb meets co-working” with the average stay being everything from a day to a year.

“Every room is an apartment, so you’ll have your own living quarters, kitchen, bed and L-shaped couch but the common areas have a cool bar, a coffee shop, a co-working space, and there’s a gym. We’ll do events every week.”

Zanzibar had planning permission for 89 rooms but Mr Jafari said his company would make a new application to Dublin City Council to develop the site. “Ideally, we’d like to get a lot more [rooms],” he said.

Locke and SACO are both affiliates of Oaktree Capital Management, the US alternative investment group that has invested heavily in the office and residential markets in Ireland in recent years.

Mr Jafari said Locke would like to operate about 500 bedrooms in Dublin but recent tax changes designed to close off a loophole in the legislation for ICAVs (Irish Collective Asset Management vehicles) had been “quite stressful to us”.

“We’re trying to figure out how we’re going to navigate through some of those recent changes. It’s probably unlikely that we’ll purchase anything further until such time as we have a better idea of that. That spooked us a bit.

“But we’re bullish specifically on the Dublin hotel market. There’s an undersupply of product and more specifically the type of product we’re looking to deliver doesn’t exist,” he said.

1 How safe is it to go back to the office?
2 More than 40% of help-to-buy recipients already had deposit
3 Most workers now expect choice to work from home part-time
4 Owner of Dundrum Town Centre to sell prized assets
5 56 financial firms entered or expanded Irish operations in 2020
6 Elderly parents living in property you own will save you on capital gains tax
7 PTSB slides into loss amid €75m bad-loans charge
8 Twitter faces $250m fine over new data privacy issue
9 New car sales down 14% in July
10 Cinema tensions laid bare by deep crack in theatrical release windows
Real news has value SUBSCRIBE