Guide of €7.25m for 32 apartments at the Round Gardens scheme in Citywest 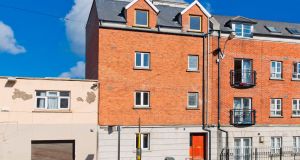 The four apartments on St James Street in Dublin 8

Four apartments on St James Street opposite St James’s Hospital in Dublin 8 are available in one lot through agent Cushman & Wakefield for €1.2 million. The portfolio could expect to produce a rent roll of about €87,000 when fully let.

All the units are vacant and include three one-beds and a two-bed duplex extending over a combined 231.4sq m (2,491sq ft). The duplex unit also has a study and patio garden to the rear.

The development is beside the Luas Red Line which gives easy access to the city centre. Also within each reach are third-level campuses at DIT Grangegorman, the Royal College of Surgeons at St Stephen’s Green and Trinity College.

Meanwhile, Savills is guiding €7.25 million for 32 apartments at the Round Gardens scheme at Citywest which is within 300m of Saggart Luas stop on the Red Line.

This standalone, crescent-shaped scheme was developed in 1999, and includes a mix of one-, two- and three-bed units with surface car parking. It is producing a rent roll of about €560,000 and adjoins Citywest Hotel and golf course.

The same agent is guiding €4.25 million for 18 apartments at the Fuel Yard development on the N2 in Finglas. These were built in 2005, and are in a five-storey block which also includes two shell and core office units which the agent says could be converted into two residential units (subject to planning permission), a vacant retail unit and 18 secure car parking spaces.

The apartments, a mix of one-, two- and three-bed units, produce a rent roll of €262,000, while the agent suggests there is potential to develop seven more apartments on site, subject to planning permission.