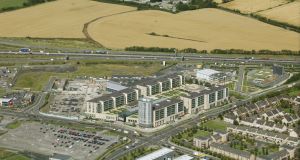 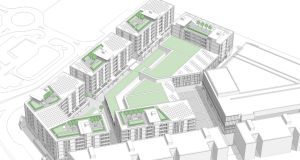 Architect’s impression of the proposed extension to Charlestown Shopping Centre, Finglas, Dublin 11, which will add shopping facilities, 233 apartments, a gym and a creche

Some 10 years after it opened for business, the owners of Charlestown Shopping Centre, on the northside of Finglas, Dublin 11, are to seek planning permission to extend it to accommodate additional shops, apartments and leisure facilities.

Bovale Development has received the financial backing of the National Asset Management Agency (Nama) to spend about €75 million on the second phase of the development. It will include 5,109sq m (55,000sq ft) of shopping facilities, a gym and creche, which will give a further boost to the current rent roll of about €2.6 million. Permission is also to be sought for an additional 233 apartments.

The retail element will include a key store opposite the entrance to the shopping centre, where anchor tenants Dunnes Stores occupy 6,967sq m (70,000sq ft). The other main tenants include Heatons, Boots, Ulster Bank, Gamestop, Bagel Factory and Eddie Rocketts.

Four years ago Nama provided the finance for two drive- through restaurants rented by McDonald’s and KFC, which were later sold to an Irish investor for just over €4 million.

Nama funding also allowed Bovale to develop and lease a nine-screen Odeon Cinema and Leisureplex on the site.

The letting agents for the next phase of the centre will be Mason Owen Lyons and Savills.