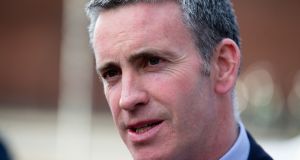 Plans for a major new retail outlet in east Cork could hinge on a decision of Minister for Housing and Urban Development Damien English who has been urged to reverse a recent decision by Cork County Council that was designed to facilitate a €100 million “tourist outlet village”.

The planning regulator, Niall Cussen, has issued a recommendation to Mr English to direct the council to annul the recent variation to the county development plan which would allow for the development of a Kildare Village-style centre near Carrigtwohill.

It is the first time that the regulator, whose office was established last year, has used his powers to make a formal recommendation to the Minister to direct a local authority to follow his orders.

Under legislation, Mr English has two weeks to decide whether to accept or reject the regulator’s recommendation.

UK property firm Rioja Estates announced its plans last November for a tourist outlet village selling heavily discounted leading brands at Killacoyne, outside the east Cork village, which would create more than 850 jobs and attract 220,000 additional tourists to the region annually. The company expressed hope that the facility could open by March 2024.

In January councillors, supported by the local authority’s chief executive Tim Lucey, voted 42-4 to alter the Cork County Development Plan to allow for a major retail outlet to be developed near Carrigtwohill.

Mr Lucey said he and his officials held a strong view that there was retail capacity to accommodate such a centre without it having an adverse impact on other retailers in Cork.

However, Mr Cussen said the recent decision by Cork County Council to go ahead with a change to the 2014 development plan was inconsistent with his own recommendation as notified to the council in November that the variation should not be made prior to the preparation by both local authorities in Cork of an updated retail strategy for the Cork region as required under retail planning guidelines.

The amendment allows for the provision of a retail outlet centre on the N25 corridor.

In a letter to Mr English, the regulator said the council’s decision was premature and resulted in a development plan that fails to set out an overall strategy for the proper planning and sustainable development of Cork which represented a breach of the legislation.

Mr Cussen said the existing Metropolitan Cork Joint Retail Strategy contained no policy guidance or direction on the development of retail outlets that were consistent with the central objectives of national retail guidelines.

He pointed out that a study which informed the recent variation made by the council concluded there was only capacity for one such retail outlet in the Cork area.

“The identification of a preferred sub-catchment for one retail type in advance of the joint retail strategy represents a piecemeal rather than strategic approach to planning” said Mr Cussen.

The regulator said it was premature to identify the preferred location for a retail outlet centre in advance of the updated joint retail strategy to be undertaken by the two councils, particularly given there was only capacity for one development of that type.

He also complained that the variation did not have sufficient regard for guidelines on spatial planning and national roads, particularly regarding road safety and traffic capacity linked to developments that were highly dependent on being accessed by cars.

The regulator noted that Transport Infrastructure Ireland had also voiced concerns about the changes made by the council given traffic issues on the N25.

Two other potential locations for a retail outlet centre on the N20 (Cork-Limerick) corridor and N22 (Cork-Killarney) corridor were identified by the council and found to have less impact on traffic, but they were not subject to detailed assessment.

Mr Cussen said his office had a statutory duty to evaluate and assess proposed variations to development plans of local authorities in relation to proper planning and sustainable development.