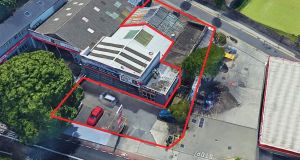 The subject property is located adjacent to the Circle K site in Donnybrook, which sold for €4.4m recently

When businessman John O’Sullivan joined forces with developers Myles O’Malley and the late Bryan Cullen on a plan for a major apartment scheme in Donnybrook in 2007, the cost of assembling its site came in at €70 million.

Had the economy kept motoring along as it had been up to then, the parcel of land bounded by Donnybrook Road, Brookville Road and Eglinton Road would have accommodated a landmark 11-storey building comprising 100 apartments. The residential element of the development was to have been complemented by offices, retail, and a restaurant looking towards the rugby grounds at one side and Donnybrook tennis club on the other.

While the onset of the great recession effectively put paid to that ambitious plan, the various elements of the two acres assembled for it are once again being targeted by developers and investors looking to unlock the potential of underutilised sites in the Donnybrook area.

Only recently, the 0.25 acre Circle K portion of the subject site was sold by agent Kelly Walsh on behalf of Nama-appointed receivers to a private investor for €4.4 million. While the property is let to Ard Services on a 10-year lease from 2014 at an annual rent of €165,000, the tenant has signed a deed of renunciation which allows for full vacant possession of the site in four years if required.

The completion of that sale has now prompted John O’Sullivan to seek a buyer for the 0.137 acre plot immediately adjacent to the Circle K site. Agent Turley Property Advisors is guiding a price of €2.5 million for the property.

The subject site briefly comprises about 557sq m (6,000sq ft) of space broken down into four distinct areas, all of which are generating rental income. The forecourt in front of Bridgestone is held on a 35-year lease from June 1991 at an annual rent of €24,000, while the car valet premises, coffee shop and offices to the rear of the site are delivering rents of €35,000, €12,000 and €10,000 respectively.

While the prospect of that rental income should be attractive to purchasers in the short term, the site’s potential value is more likely to be realised from the future redevelopment of the plot assembled originally in 2007.

Michael Turley says he expects the sale of the site, which he describes as “one of the last pieces of a large jigsaw”, to attract a potential investor or developer looking to unlock one of the few remaining sites in Donnybrook.