BidX1 to offer more than 50 lots for auction today 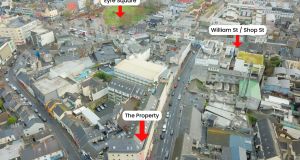 BidX1 is guiding a price of €2.9 million for eight units on Eglinton Street in Galway city centre.

Irish online auctioneer BidX1 holds its second sale of the year today with more than 50 commercial assets with a combined guide price of €25 million going under the virtual hammer. The mix includes office, industrial, retail, development land and multi-family residential.

Retail investments feature prominently, with eight units on Eglinton Street in Galway, within walking distance of Eyre Square, guiding at a price of €2.9 million. All but one of the units are tenanted, generating €314,609 per annum, equating to a net initial yield of 9.77 per cent.

An attractive “above-the-shop” prospect at Mount Merrion – an income-generating retail unit at ground-floor level with a newly-refurbished three-bedroom apartment overhead – is guiding €550,000.

Four ground-floor units at Marlfield Mall in Tallaght are also going under the hammer. Let to a beauty salon, a “Mr Price” store and a take-away, with one unit vacant, the lot currently brings in €131,370 annually, a net initial yield of 12.57 per cent. Bids open today at €900,000

A mixed-use investment on Carysfort Avenue in Blackrock, comprising office, retail, public house and residential accommodation is also being offered. With potential for redevelopment and a current net initial yield of 7.96 per cent, BidX1 are guiding €1.7 million.

The catalogue is largely commercial or mixed-use stock, but residential investments include a portfolio of four apartments, adjacent to Dundrum Town Centre in south Dublin, guiding €1 million, and the same number of apartments in Clondalkin with a guide of €450,000. BidX1 are also offering Mulgrave Lodge in Dun Laoghaire, an 11-bedroom guest house guiding €750,000.

BidX1 operates in the UK, Ireland, South Africa, Spain and Cyprus, and recently announced a collaboration with well-known London estate agency Foxtons, which will see the latter offer selected properties in BidX1 auctions.

Commenting on that deal, Stephen McCarthy, ceo and founder of BidX1, said: “There are clear synergies in a collaboration which brings together Foxtons, London’s leading estate agent, and BidX1, market leaders in the digitisation of property transactions, and we’re very excited to be working with them.”