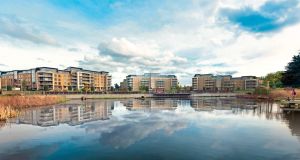 Honeypark in Dún Laoghaire: Ireland’s largest buy-to-let apartment development has been bought by a German fund

A German real estate fund is to buy Ireland’s largest build-to-let apartment development, which is in the early stages of construction in Dún Laoghaire, Co Dublin.

The German fund, Patrizia, was the top bidder at about €132 million – marginally more than most of the other bidders – for two blocks with a total of 319 multifamily apartments at the former Dún Laoghaire golf course off Upper Glenageary Road.

The project is being funded by Nama and developed by the Cosgrave Property Group as part of its exit strategy from Nama.

The widespread interest in the investment (bidders included Irish Life, Irish Reit, AIG, SW3 and Tristan Capital Partners) underlines the continuing confidence in a rental market that is under-supplied even before a string of companies are expected to announce that they are relocating from London to Dublin due to Brexit.

The likelihood is that the 319 apartments under construction at Honeypark in Dún Laoghaire will produce an annual rental income between €7.17 million and €7.84 million, according to selling agent Hooke & MacDonald. The investment yield will be 5.5-6 per cent.

The two five-storey individual blocks will be broadly similar but on a larger scale to the adjoining Neptune Building with 197 apartments, which was completed earlier this year and sold beforehand to two investment groups for €72.5 million. The investment return in this case was 5.8 per cent.

London-based Tristan Capital Partners holds a majority stake in the Neptune Building, which it bought along with SW3 Capital, an investment company with offices in Dublin and London and headed by Irish partners Tom O’Mahony and Adam Rooney.

In the latest Honeypark sale, the Charlotte Building with 159 apartments and the Leona Building with 160 homes will overlook a landscaped five-acre park, lake and playground area. There will be a considerable mixture of apartment types in both blocks, with a total of 197 two-bedroom units, 61 one-beds and the same number of three-beds.

Patrizia made its first appearance on the Dublin scene two years ago, when it bought a relatively new development of 63 apartments next to the North Circular Road entrance to the Phoenix Park for €15 million.

The German fund got particularly good value in the Park Lodge apartments and followed up nine months later with the €140 million purchase of The Oval office development at Shelbourne Road in Ballsbridge.

That investment is showing a return of more than 5 per cent.