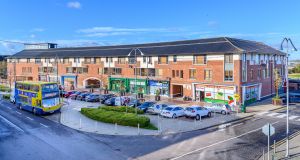 Those looking for a combination of immediate and secure rental income and the opportunity to increase that income further will be interested in a high-yielding investment which has been brought to the market in Dublin 15.

Agent Hooke & MacDonald is guiding a price of €9 million for a portfolio comprising the majority of the commercial units at the Plaza in Tyrellstown, which is located approximately 2.8km north of the Blanchardstown Centre and 12km northwest of Dublin city centre. Built by developer Rick Larkin’s Twinlite about 15 years ago, the Tyrrelstown scheme comprises one of the largest residential developments undertaken in Ireland, with more than 2,000 residential dwellings, approximately 8,361sq m (89,997sq ft) of town-centre retail and commercial space which includes a large Lidl store, the four-star Carlton Hotel Blanchardstown, along with a number of schools.

The investment comprises 6,152sq m (66,220sq ft) of the commercial space within Tyrellstown’s town centre, and consists of a mix of national and local occupiers including SuperValu, Hickey’s Pharmacy, Permanent TSB, Carry Out Off Licence and Paddy Power, with about 50 per cent of the income secured against these five leading national covenants who on average have approximately 10 years left to run on their leases.

The investment currently produces a net rental income of € 1,012,112 per annum from the existing tenancies, which have an average weighted unexpired lease term of about seven years to expiry. There is immediate potential for increased rental income from the letting of the vacant units, with the projected estimated rental value of the investment in the region of €1,153,000 per annum, which would represent an increase of approximately 14 per cent on the current rental income.

The incoming purchaser is likely to seek an occupier for the fully fitted and licensed pub and restaurant unit (of 898sq m/9,666sq ft). In addition, there are also three fully-fitted office suites that could be re-let or alternatively could be converted to residential use subject to planning permission. Prospective purchasers should note that there is a recent precedent within the scheme for conversion from commercial to residential use.

The guide price of €9 million equates to a net initial yield of 10.23 per cent (after standard purchaser’s costs) based on the current income. Using Hooke & MacDonald’s projected estimated rental value on the vacant units, this could generate a potential net yield of 11.65 per cent once the investment has been fully let by a new owner.