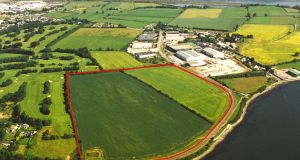 Cushman & Wakefield’s latest quarterly monitor suggests that there were 68 development land sales worth €229 million in the first nine months of 2020.

Irish development land sales have plummeted by 73 per cent this year as a result of the Covid-19 pandemic, according to commercial real estate company Cushman & Wakefield.

The group’s latest quarterly monitor suggests that there were 68 development land sales worth €229 million in the first nine months of 2020. This compares to 99 transactions worth €859 million during the same period last year.

“While the first three quarters of the year proved challenging, there remains significant demand for well-located sites and those which have planning permission in place for residential development,” Cushman & Wakefield’s Kevin Leonard said.

“We expect a return to more normal market conditions, as both purchasers and vendors adjust to the current economic and market challenges.”

Dublin, where the housing need is most acute, accounted for the majority of activity, capturing 58 per cent of turnover.

Dublin and its neighbouring counties of Kildare, Meath and Wicklow combined achieved €179 million over the period, the report found.

The study highlights a pick-up in sales in the third quarter reflecting the easing of pandemic-related restrictions.

The three-month period saw approximately €97 million transacted across the Greater Dublin Area (GDA), and the regional centres of Cork, Limerick and Galway nearly double the value achieved in the second quarter.

The largest transaction in the third quarter was the sale of approximately 52 acres of land at Harbour Point, Bray, Co Wicklow, for a reported price of around €30 million.

Another transaction highlighted was Cairns Homes acquisition of a 1.4 acre site at the former Esmonde Motors, Stillorgan, Co Dublin.

“Anecdotal evidence suggests Cairn Homes plans to combine its adjoining site, the Blakes site, with its most recent acquisition for residential development in the Dublin suburb,” Cushman & Wakefield said.