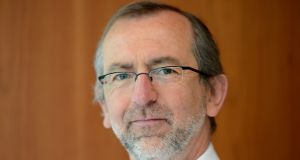 John Bruder of Burlington Real Estate: “By the time we came around, that small opportunity had been pretty well mopped up.” Photograph: Alan Betson

Burlington Real Estate has scrapped plans to float a real-estate investment trust (Reit), having been beaten to the market by a number of other property companies as the property market began to recover following the crash.

The Dublin-based firm’s managing director John Bruder told Bloomberg in an interview that “by the time we came around, that small opportunity had been pretty well mopped up”.

Burlington Real Estate is now focused on a joint property investment firm with Appian Asset Management, which was set up late last year with plans to invest about €50 million in commercial property in Ireland over 18 months.

The fund, which will target a 5 per cent annual dividend, had raised about €15 million so far, Mr Bruder told Bloomberg.

Burlington Real Estate, which was set up in 2012 by Mr Bruder and fellow former Treasury Holdings executive Niall Kavanagh, had been preparing to float a Reit in Dublin in 2014, with the aim of raising €300 million.

The company has been involved in more than €750 million worth of transactions since 2013, according to its website, operating across the office, retail, residential and industrial sectors.

The company continues to manage some assets formerly owned by Treasury Holdings, which was seized by creditors in 2012, after the property bubble burst.

These included John Paulson, who made billions of dollars betting against the US subprime mortgage market before the financial crash in 2008, and Hungarian-American financier George Soros, who earned $1.5 billion and a reputation as the man who broke the Bank of England when he bet against sterling in 1992.

Many of the initial investors have since cashed in most of their investment, making significant profits in the process.

The three Reits currently have a combined market capitalisation of €2.34 billion.