Commercial property sales drop by over 50% as Covid hits market 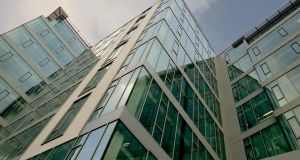 A total of €251m in direct investment sales were transacted in the Irish commercial property market in quarter three, according to Cushman & Wakefield. Photograph: David Sleator

Commercial property sales in the Irish market have dropped by over 50 per cent as a result of Covid-19, according to commercial real estate company Cushman & Wakefield.

In the nine months to the end of September, direct investment sales totalled €1.15 billion, representing a significant decline on the same period in 2019 where €2.4 billion was recorded, the group’s latest report shows.

“As expected the summer months witnessed fewer investment transactions due to the fallout created by Covid-19,” Cushman & Wakefield’s Kevin Donohue said. “ Investors have taken the opportunity to review their portfolios, and as a result a large number of assets have been launched to the market, pointing to a busy year end.”

Yet the company’s analysis points to a stronger-than-anticipated pick up in sales in the third quarter.

A total of €251 million in direct investment sales were transacted in the Irish commercial property market in quarter three, it said.

“Despite Covid-19 uncertainty the solid investor demand also saw a number of forward commit transactions take place which, when combined, bring the sum to €680 million in the three-month period,” Mr Donohue said.

Office assets accounted for nearly 70 per cent or €794 million of the transactions in the nine months to September.

Investment in residential assets with a lease/tenant attached accounted for 11 per cent of turnover in the year to date, the company’s report said.

The third quarter saw the sale of the Prestige Portfolio to investment manager DWS for a price in the region of €145 million. The portfolio represents the largest PRS transaction in the year to date, and comprises three schemes under construction and one existing scheme located in Cedar Place, Swords, Co Dublin.

Despite the hurdles facing foreign investors, such as Covid-19 travel restrictions, the attractiveness of Irish commercial property is evident by their continued strong presence in the market, the company said.