Gibson Hotel in docklands’ Point Village for sale at €87m

Harry Crosbie-developed property is leased to Dalata on passing yearly rent of €4.65m 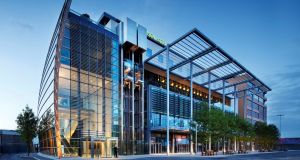 The Gibson Hotel has 20 suites among its 252 bedrooms 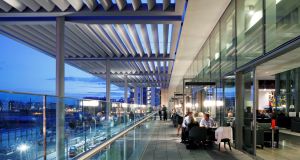 The four-star Gibson Hotel in Dublin’s north docklands is to be offered for sale as a long-term investment for a figure expected to be in excess of €87 million.

The 252-bedroom hotel is let to a subsidiary of Dalata, Ireland’s largest hotel operator, on a lease which has another 17.8 years to run. The investment will show a net initial yield of around 5.12 per cent.

The Gibson has traded successfully since it opened seven years ago at the Point Village, where it was developed along with a shopping centre and offices by businessman Harry Crosbie.

He has been involved in a long-running legal dispute with Nama since it began taking over his assets, which originally included the Point Depot (now the 3 Arena) and the Bord Gáis Energy Theatre.

Receivers Paul McCann and Stephen Tennant of Grant Thornton are overseeing the hotel sale, which will be handled by Fergus O’Farrell and Tom Barrett of Savills.

The sale is expected to attract considerable Irish and overseas interest given that hotel investment sales are quite rare in the Irish market and this one will be available at a yield of 5.12 per cent when returns in the Dublin office market are heading for 4.5 per cent and retail yields look like ending up at close to 3 per cent.

Although the Burlington Hotel was vacant when sold to the German investment fund DekaBank, the new owners had already agreed a pre-letting to Dalata when they completed the purchase.

The sale coincides with a sharp upturn in building activity on adjoining sites in the north docklands. The hotel is one of many businesses benefitting from the opening of the Luas Red Line, which links the docks area with the city centre.

Named after the famous Gibson guitar and designed by Dublin architects Scott Tallon Walker, the hotel has 20 suites among its 252 bedrooms. It has large public spaces, including a 120-seat restaurant and two bars, along with spa facilities and a gymnasium.

The conference and banqueting facilities include nine rooms over two floors that can seat up to 300 patrons.

The success of the hotel is also greatly helped by the availability of 800 parking spaces in the basement car park.

The Gibson is let to Galsay Limited, a subsidiary of Dalata plc, under a 25-year lease from June 2010, which expires in 2035. The current rent of €4.65 million is subject to five-yearly upwards-only rent reviews.

The Gibson is the only Dalata hotel with a branding outside of its Maldron and Clayton brands, underlining its successful reputation in a buoyant Irish hotel market that operated at 83 per cent occupancy in 2016.

Fergus O’Farrell said he expected the hotel to attract interest from a spectrum of investors looking for secure cash flow and the opportunity to benefit from the continued performance of the Irish economy, in particular the Irish hotel and tourism industry.

Tom Barrett said the underlying Dublin hotel market had enjoyed a period of sustained growth due to an improved wider economy, increased visitor numbers and a growing corporate occupier market.

The Gibson, he added, was exceptionally well positioned to capitalise on expected further growth in the coming years.