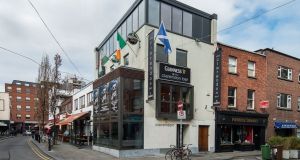 The brothers paid in excess of €2.4 million for the business premises – well ahead of the guide price of €1.6 million-plus set by John Ryan of selling agents CBRE.

The competitive bidding for the bar between publicans and investors will come as a surprise to the owners of many secondary pubs, particularly in Dublin’s north inner city, who are reluctant to offer their businesses for sale because of the poor demand.

A considerable number of licensed premises which previously traded all day now open only at night because of the fall-off in business in recent years.

The Clarendon Inn has the advantage of being located halfway between Grafton and South Great George’s Street in an area now noted for its restaurants, bars and entertainment facilities.

The bar was bought in 1992 for €1.2 million by Christian and Simon Stokes, who borrowed heavily to demolish it and replace it with a four- storey-over-basement pub. The brothers then sold the investment to developer Bernard McNamara for €7 million and leased it back at a rent of €400,000 per annum.

The Clarendon Inn has an overall floor area of 378sq m (4,068sq ft) including a ground floor lounge bar with an outside seating area.

The business was sold on the instructions of receiver Declan Taite of Duff & Phelps.