Castlemarket restaurant in Dublin 2 on the menu at €1.75m 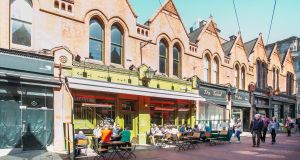 With any number of private investors on the lookout for retail investments in Dublin’s south inner city because of the unattractive interest rates being offered by the banks, there is certain to be considerable competition for two interconnecting restaurant buildings going for sale along the pedestrianised Castlemarket area of the south inner city.

Turley Property Advisers are guiding €1,750,000 for the JoBurger retail premises which are currently rented at €120,000 per annum and will give the next owner a net initial yield of 7 per cent. The current guide is a long way from the price paid for the same premises by a Dublin restauranteur just before the property crash.

Castlemarket is now recognised as the centrepiece of the city’s busiest restaurant and entertainment district where a range of bars and restaurants have opened in recent years including I’Gueuleton, Fallon & Byrne, La Maison, Drury Buildings, Eden Restaurant, Fade Street Social and the Gourmet Burger Kitchen.

Like the two other restaurants on the same street, JoBurger serves meals along the pedestrian area outside the front of the premises.

The area around Castlemarket has for long been dominated by small indigenous retailers.

However, the recent arrival of Starbucks in Drury Street has greatly displeased some.