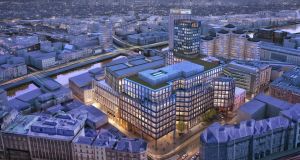 A computer-generated image of the 21-storey office and apartment block Marlet intends to build at College Square, the site of Apollo House.

Developer Pat Crean’s Marlet Property Group has secured a green light from An Bord Pleanála to increase the height of the 11-storey office block it is planning to deliver on the site of the former Apollo House in Dublin to 21 storeys.

While the proposal for the taller structure at the College Square development had already been approved by Dublin City Council last December, its decision was appealed by An Taisce.

In upholding the council’s original ruling, the appeals board has cleared the way for Marlet to add a 10-storey tower comprising 54 build-to-rent apartments to the top of the office scheme.

The apartments will comprise 45 one-bedroom and nine two-bedroom units, and will be complemented by 207.9sq m (2,237sq ft) of internal communal amenity space, as well as external terrace areas. The combined height of the amended College Square development will rise to 78.95m (262ft) above street level.

The decision to approve the taller scheme is in keeping with former minister for housing Eoghan Murphy’s Urban Development and Building Height guidelines, the aim of which is to make more efficient use of land in the city and lessen the impact of urban sprawl.

Upon completion the College Square development will comprise a total of 37,622sq m (404,960sq ft) of offices distributed across the sites occupied formerly by Apollo House and the neighbouring College House.