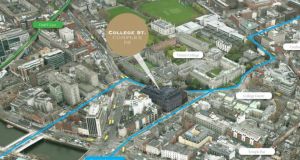 The Westin Hotel and AIB branch at College Street-Westmoreland Street: initial yield of 5.06 per cent

The recent sale of the five-star Westin Hotel and the adjoining AIB bank branch on Dublin’s Westmoreland Street and College Street is to be followed by the disposal of the freehold interests in the same city centre buildings. .

The leases provide for upwards only reviews every five years linked to the rent set for the bank premises.

Sarah Dillon of DTZ said that while ground lease investments were rare to the Irish market they were viewed as relatively safe investments given that they were backed by the underlying collateral of the land and buildings.

The ground lease is held by College Green Hotel Ltd., an investment vehicle controlled by US billionaire John Malone who bought the hotel in July for €65 million.

Ms Dillon said DTZ were expecting “very considerable interest” in what was a rare investment with such a secure income stream.

The sale will obviously be of interest also to Mr Malone, the businessman behind UPC-owner Liberty Capital, who also recently bought two other Dublin hotels, The Trinity City Hotel on Pearse Street and the Hilton Hotel at Charlemont Place.

The Westin is to be operated by John Lally’s Lalco Hotel Group under a franchise agreement with Westin Hotels & Resorts.

In addition to the three hotels to be operated in partnership with Mr Malone, Lalco also runs the Limerick Strand Hotel, the Harbour Hotel in Galwlay and the Glenlo Abbey Hotel and Golf Club among others.