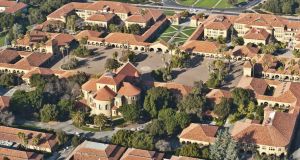 Stanford University in Silicon Valley. Locals, according to Karlin Lillington, have fallen out of love with Big Tech.

A majority of potential claimants in the case of Custom House Capital (CHC) have yet to receive compensation, some seven years after the broker was found to have misappropriated some €66.5 million from customers. Fiona Reddan reports.

The Data Protection Commission has said it is investigating “potential breaches” of the General Data Protection Regulation by a government department, following a complaint that it allegedly interfered with the role of its data protection officer, an offence under the EU legislation. Elaine Edwards has the details.

Irish companies are lagging behind their European peers in adopting the cloud, a new survey claims, as data volumes surge and more than a quarter admit they don’t have the infrastructure to deal with the rise, writes Ciara O’Brien

New figures show that the US vulture fund that bought State assets agency Nama’s Northern Ireland property loans in a controversial deal had collected more than €1.5 billion from developers by the end of last year. Barry O’Halloran reports.

Venture capital funding fell significantly in the third quarter of the year, decreasing by 47 per cent to €170 million, according to the latest reports, reports Ciara O’Brien.

What do drones, smart fridges and wearable tech have in common? Apart from perhaps making your Christmas list this year, they are part of a global strategy to save millions of lives through immunisation, writes Marie Boran

Locals in Silicon Valley have fallen seriously out of love with Big Tech, writes one-time resident and our weekly columnist Karlin Lillington.

Why are Republic of Ireland football managers paid so well? Ciarán Hancock asks the question on the Inside Business podcast.

The Beauty Buddy is the brainchild of sisters Wendy Slattery and Tracy Leavy who describe it as “like TripAdvisor for beauty” as it brings all the information about products together in one place, writes Olive Keogh.

Customisable hair care is the premise behind one of the hottest developments in the beauty business, writes Courtney Rubin.

How has it come to this, wonders Cantillon, Ireland has become a net importer of spuds. And business is advised to keep its powder dry as Brexit continues to career all over the place.

For many people living with autism, social interactions can be like being in a country where you don’t speak the language, reports Ciara O’Brien. What neurotypical people take for granted - interpreting cues from body language, tones and facial expressions, establishing a rapport with eye contact - can be a challenge, but AI may be able to help.

The Mars mission as a major success for Nasa, writes columnist Dick Ahlstom, but Donald Trump’s plans may may bring it back down to earth.

Cliff Taylor: Deal or no deal we are now heading for a hard Brexit 13:09
Danish retailer Jysk on track to double Irish store numbers by end of 2021 12:49
Central Bank rules out changes to mortgage rules during pandemic 12:31
Admission of mistake in Oxford vaccine dose raises doubts over reliability 12:30
Irish Life fund pays €49m for 94 Dalkey apartments 12:02

1 Karlin Lillington: How I managed to cut my mobile phone bill by at least half
2 Admission of mistake in Oxford vaccine dose raises doubts over reliability
3 State may face €1bn in compensation in Covid-19 case, Press Up claims
4 Smarter ways to heat your home: Eight of the best modern systems
5 Irish Life fund pays €49m for 94 Dalkey apartments
6 Central Bank rules out changes to mortgage rules during pandemic
7 Fiona Reddan: Who’s afraid of Revolut? Not AIB and BOI it seems
8 Lahinch Golf Club runs out of its own cash after €3m Covid-19 hit
9 Workhuman predicts double-digit revenue growth for 2020
10 Danish retailer Jysk on track to double Irish store numbers by end of 2021
Real news has value SUBSCRIBE