All eyes on Boeing as summer reporting season for airlines starts

Your business diary: Irish banks enter their reporting season under something of a cloud 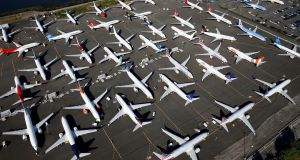 Boeing to come under pressure

Ryanair has featured heavily in the business news recently and its results are not even out until next week. The reason is Boeing, whose results are out on Wednesday.

The summer reporting season for airlines comes firmly under the shadow of the plane manufacturer’s disastrous Max production line woes – the troubled aircraft that has remained grounded, causing all manner of problems to the industry.

Last week Ryanair cut passenger growth forecasts and said it would look at base closures from November amid delays in the delivery of Boeing’s new 737 Max. Although its share price did rise, with investors seeing a pathway to higher profits as a result of fewer aircraft and rising fares.

Still, for Boeing there can be no such reprieve and its fiasco will certainly begin to seep into its finances.

For now, the cost of the problem cannot be safely estimated, although it was reported last Friday that Boeing will take a £3.9 billion hit just to cover possible compensation to airlines. Last week for example, Ryanair’s Michael O’Leary told analysts his company would likely demand that Boeing cover some of the cost of the delays.

In April, Boeing lost $1 billion in revenues and suspended full year guidance “due to the uncertainty of the timing and conditions surrounding return to service of the 737 Max fleet”, previously its largest cash generator.

Much like the airline industry, Irish banks enter their reporting season under something of a cloud.

With Permanent TSB set to report on Thursday and AIB on Friday, this week’s results come immediately after the winding down of the tracker mortgage scandal.

The Central Bank’s final report on the subject showed the total number of affected customers hit 40,100, with lenders paying out €683 million in refunds and compensation so far.

PTSB, the first to come under scrutiny back in 2015, has been hit with a record €21 million fine for its treatment of, eventually, over 2,000 customers.

AIB has more than 12,000 tracker cases. The bank said its final payments are “almost complete” and that it would deal with any ongoing complaints or appeals. It has also sent out warnings that it faces additional costs relating to the issue and has set aside €265 million to cover refunds, compensation and other costs.

Meanwhile, in its monthly analysis of the banking sector late last month, Davy said a “seismic shift in the interest rate outlook” was a fundamental challenge to their core business models – lower-for-longer interest rates impair profitability from maturity transformation, it said.

Davy reduced its earnings forecasts to reflect the negative impact of lower reinvestment rates on treasury portfolios and structural hedges, the pass-through to business lending rates and a flat outlook for tracker mortgage rates.