IEA does not expect ‘huge increase’ in crude oil prices

Last year, the agency predicted that 2019 oil demand would grow by 1.5m barrels per day 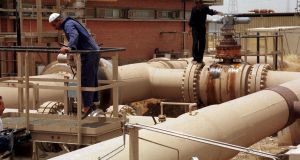 Iraqi oil workers inspect pipelines at one of the oil refineries in the Kirkuk area.

The International Energy Agency (IEA) doesn’t expect oil prices to rise significantly because demand is slowing and there is a glut in global crude markets, its executive director said on Friday.

“Prices are determined by the markets ... If we see the market today we see that the demand is slowing down considerably,” said IEA’s Fatih Birol, in public comments made during a two-day energy conference in New Delhi.

The IEA is revising its 2019 global oil demand growth forecast down to 1.1 million barrels per day (bpd) and may cut it again if the global economy and especially China shows further weakness, Birol told Reuters in an interview on Thursday.

Last year, the IEA predicted that 2019 oil demand would grow by 1.5 million bpd. But in June this year it cut the growth forecast to 1.2 million bpd.

“Substantial amount of oil is coming from the United States, about 1.8 million barrels per day, plus oil from Iraq, Brazil and Libya,” Birol said.

Under normal circumstances, he said, he doesn’t expect a “huge increase” in crude oil prices. But Birol warned serious political tensions could yet impact market dynamics.

Crude oil prices rose nearly 2 per cent on Friday after a US Navy ship destroyed an Iranian drone in the Strait of Hormuz, a major chokepoint for global crude flows.

Referring to India, Birol stressed the country could cut its imports, amid rising oil demand in the country, by increasing domestic local oil and gas production.

Prime Minister Narendra Modi had set a target in 2015 to cut India’s dependence on oil imports to two-thirds of consumption by 2022, and half by 2030. But rising demand and low domestic production have pushed imports to 84 per cent of total needs in the last five years, government data shows.

Meanwhile, the IEA doesn’t expect a global push towards environmentally friendly electric vehicles can dent crude demand significantly, Birol said, as the main driver of crude demand globally has been petrochemicals, not cars.

He said the impact of a serious electric vehicle adoption push by the Indian government would not be felt immediately. – Reuters

1 Opioid executive admits to ‘no morals’ ahead of prison term
2 Are there annual limits on inheritances or gifts to a child?
3 Fallon & Byrne founders McHugh and Byrne exit group
4 South Dublin Credit Union members urged to borrow more to ensure survival
5 American YouTubers embrace the crisp sandwich
6 From chips to €14bn in trade: Ireland and Italy’s enduring exchange
7 My father in a nursing home wants to gift me his house
8 NI businesses fear burden of post-Brexit red tape on goods transport
9 Farmer seeks to challenge €3.6bn Intel plan in High Court
10 Who are Ireland’s 17 billionaires?
Real news has value SUBSCRIBE