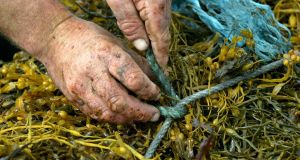 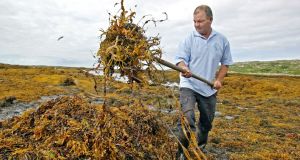 The company, which was bought from the State by Canadian multinational Acadian Seaplants for an undisclosed sum in 2014, said it could take well over a year for the revised applications to be lodged.

Late last week, Minister of State for Local Government, Damien English, said his department could not license seaweed harvesting in an area where there was an existing right to harvest seaweed.

“I have also clarified that existing seaweed rights holders can continue to exercise their right to harvest seaweed and do not require consent under the Foreshore Act, although they must respect relevant national and European environmental legislation,” he said at the ocean wealth summit in Galway.

His announcement has been welcomed by traditional harvesters in Connemara.

Mr English said he had informed existing applicants of the position and “would work with them to consider how it would impact on their applications”.

Under the 1933 Foreshore Act, which is currently being updated, a minister is empowered to make leases and grant licences and prohibit removal of “beach material”.

However, not all foreshore is State-owned, and rights to harvest seaweed may be recorded in landowner folios and in deeds dating from the break up of estates under the Land Commission in the 1920.

While companies seeking to harvest seaweed were obliged to apply for a licence, traditional harvesters were not, under a system similar to “turbary” rights for cutting turf.

A review of seaweed harvesting licensing was initiated by the then Department of Environment in 2014. Consultation by Mr English’s department with the Attorney General’s office and the Property Registration Authority is understood to have involved a trawl of over 100,000 folios.

“We welcome the efforts put in by Minister English, and we will review and resubmit our licence application – which may now involve hundreds of licence applications,” Arramara’s Europe director-strategic affairs Jim Keogh told The Irish Times.

Mr Keogh said the company would be clarifying whether the information obtained on folio rights would be available to the applicants.