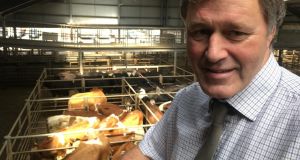 Cattle farmers are facing an acute fodder crisis this winter due to a drought-induced absence of grass.

They say sustained rain next month – much more than the showers of the past few days – are needed to avert crisis.

The grim outlook was evident at last week’s Kilkenny Mart where the relatively small number of cattle on sale was matched by a gloomy outlook among buyers and sellers.

There are more than 250 pens inside the huge livestock holding area at Thursday’s mart but only about 30 of them were occupied. The animals were a mix of Friesians and Limousin, heifers and bullocks, and a couple of bulls.

Each beast has a circular-shaped white sticker on its back – its lot number, indicating its place in the queue of the auction. They snorted and bellowed and defecated as per usual, creating that distinctive but pleasing aroma of the farm.

But for a structure the size of an aircraft hanger, the mart’s holding area for animals was substantially empty. Although there was a pungent air of activity about the place, the atmosphere was somewhat subdued, even in the noisy salesrings.

A couple of dozen farmers strolled the gantries and peered down at the animals. Below, others leaned on the pen rails, sucked on cigarettes or slapped sticks against their wellingtons as if to gee themselves up.

Most were chatting, employing the often strange verbal hieroglyphics of rural Ireland.

“Them fellows in there,” said part-time farmer PJ Stapleton, loading his two-year-old but huge brown bull back into his trailer after it failed to sell and, referring to the farmers still standing by the pens, added: “them fellows aren’t doing too well.”

“You can’t manage these days without a laying hen,” he said as his caged bull thumped the side of the trailer.

The “laying hen”, he explained, is the wife – working outside the farm and whose wages keep the show on the road.

Farmers are seen by many non-farmers as notorious complainers – the weather is too wet, if it’s not too dry; and prices are never, ever right. But the current crisis facing farmers is very real and there’s an air of fatalism to their conversation about the problems stemming from the weather the rest of the country has been basking in.

The problem is that grass growth has all but ceased for well over a month, meaning that cattle and sheep farmers are staring into a winter without sufficient fodder to see them through to next spring.

Most farmers cut a first silage harvest in June, leaving stock to feed on uncut grass in the expectation that the cut field would crop again, delivering a second harvest in August.

But the uncut field has now been eaten and there’ll be no second harvest as long as the drought continues.

This means the crop of silage, perhaps half of what is needed, will have to be supplemented with meal or other expensive supplement as the winter deepens and the silage supply dwindles.

“We’ve had no growth and no grass,” said mart manager Michael Lynch.

Between excessive snow and unusually high levels of rain, farmers had had a disastrous spring right up to the end of May, he said.

Thursday’s sale was of some 350 cattle – 200 bullocks (castrated males) and between 100 and 150 heifers (female cows) and culled cows (dairy cattle at the end of their milk-producing lives). The mart, one of the largest and most modern in the country, serves farmers in the agriculturally prosperous nine-county catchment area of the southeast.

There is evidence, say some, of dairy farmers, having overexpanded following the ending of European Union milk quotas in March 2015. A lot of farmers, said Lynch, would have expanded their dairy herds from perhaps 60 cattle to 200, borrowing anything from €200,000 to €500,000.

“There’s young lads who came home from Australia or the US and went from 200 to 400 cows on daddy’s farm that are now struggling to pay – and that was before the weather,” he said.

Add to that the no-grass effect of the drought, together with the likelihood of a significant fodder shortage this winter, and you get dairy farmers seeking to downsize now, into a market that is being deserted by worried would-be buyers.

“The drought is having a massive effect on prices [down €50 and €100 a head] and on finding buyers,” said Lynch.

“That means we’d need five consecutive days of about 20 mils a day to get growth back,” he said.

And if that doesn’t happen?

“We’re heading for an absolute famine next winter unless you get very, very good growth conditions from the back end of August to November.”

PJ Stapleton’s fine-looking bull made €1,210 in Ring 2 but he didn’t accept the bid.

Just then, a potential buyer hoved into view, affecting a disinterested air.

“What’s the price,” the man asked.

But the man wasn’t biting.

“Keep walking, keep walking,” said PJ, who because he also works for Pat the Baker, is his own laying hen.