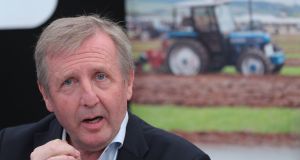 The protests which have badly hit the beef processing sector appear to be coming to an end, with votes at the weekend to end the remaining blockades.

The Minister for Agriculture, Food and the Marine, Michael Creed, now intends to set about getting a beef sector task force up and running, as long as the blockades have all ended.

Those plants that have laid off staff and put operations on hold are to begin resuming operations as soon as is feasible.

The farmers, by way of the Beef Plan Movement, have been protesting about the price being paid for their cattle, which they argue does not make farming sustainable.

However, efforts to address the farmers’ concerns have been hampered by competition law, which prohibits discussion on price agreements, and the price available for what is a European market.

The Minister for Justice and Equality, Charlie Flanagan was updated over the weekend about the situation by members of Meat Industry Ireland, which represents the processing plants. The sector has laid off hundreds of workers on a temporary basis.

A spokesman for the group said illegal action by a small minority was negatively affecting the livelihoods of thousands of workers, farmers with cattle to sell, hauliers, and other service providers, and was putting “the entire Irish beef sector in jeopardy”.

Severe long-term damage to the sector had occurred, he said, with customers placing orders for the next month with alternative suppliers across Europe and beyond.

“Over the last number of weeks, genuine farmers have missed out on the sale of cattle for processing worth €120 million.”