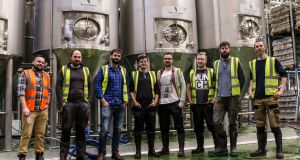 Irish craft beer maker Rye River Brewing is planning to raise €2.5 million in new funding this year to expand the brewing and bottling capacity of its Celbridge plant to increase its export capability.

Rye River’s managing director Tom Cronin said it would probably seek to raise the money from a non-bank lender as it looks to expand its capacity by a third to about 40 hectolitres a year.

“Craft beer is capital intensive,” he told The Irish Times. “Our next stage of development is to finance a new brewhouse because we are brewing around the clock at present. We’ll go down the route later this year of financing hopefully a new brewhouse and a new bottling line to allow our growth continue.”

Mr Cronin was speaking on the fringe of the EY Entrepreneur of the Year awards CEO retreat last week in Hong Kong. Mr Cronin has been nominated in the emerging category for the EY awards and was one of more than 100 business leaders from Ireland who participated in the retreat.

Latest accounts for Rye River Brewing show it returned to operating profitability after withdrawing from third-party agency brand contracts. However, it made a loss for the year of €194,201 after booking an interest charge of €461,284.

The change in strategy here led to revenues in the Republic dropping by 5.5 per cent but sales of own-produced beers grew by 34 per cent.

“Exiting the agency brands was the best thing we did,” Mr Cronin said, citing the small margins involved in this business. “We are absolutely not going back into agency brands.”

Mr Cronin say Rye River would also begin exporting to Finland on the back of securing a tender to supply more than 200 state-controlled stores in the ALKO chain from August 8th with its McGargles Dan’s Double IPA.

“This will be the only Irish IPA that will be available within the chain and is indicative of how far the quality of Irish craft beer has come,” Mr Cronin said. “Finland is a mature market and in the top five in terms of volume and market share for craft beer in Europe. ”

This is part of a wider plan by Rye River to increase its sales across Europe. In 2018, the brewer doubled its sales across Europe to about €2.7 million and this trend has continued into this year with expansion beyond the current 25 export markets that it serves. “My focus has to be on exports,” Mr Cronin said.

The export focus contributed to a return to operating profit of €85,317 in 2018, having racked up losses of more than €4 million over the previous two years.

Established in 2013, Rye River Brewing Company employs 47 staff and is best known for their McGargles beer brand. It brewed more than 30,000 hectolitres across five brands last year. It is one of 110 breweries currently operating in Ireland.

1 Should I switch bank now with Ulster Bank at risk of closing?
2 Will brother’s widow get half of our parents’ estate when they die?
3 Irish household wealth grew by €76,000 in years following crash
4 Banks face ‘hectic’ loan restructuring as payment breaks end, Goodbody warns
5 EU said to be leaning towards appealing Apple tax decision
6 House insurance: save yourself money by reviewing your policy
7 Finance Ireland refinances mortgages with low level of payment breaks
8 Facebook unveils €4.7m grant programme for Irish SMEs
9 Isme to support legal action against pension tax relief limit
10 Aldi and Lidl at back of queue during UK pandemic
Real news has value SUBSCRIBE