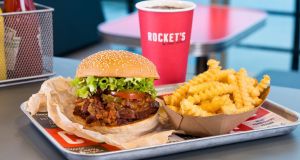 Rocket’s opened its first German outlet in a Center Parcs resort with a franchise partner, Areas.

Rocket Restaurants, the group behind the Rocket’s and Eddie Rocket’s burger chains, has held discussions with potential partners to expand in Germany.

The group, which operates 51 restaurants, almost all in the Irish market, is targeting Europe for expansion of its fast-casual Rocket’s brand. It opened its first outlet in a Center Parcs resort in Germany with a franchise partner, large German group Areas, last October. Its second outlet in conjunction with Areas is due to open in November in a train station in Leipzig.

Rocket Restaurants, founded by entrepreneur Niall Fortune, has an agreement with Areas to open 16 restaurants in Germany, which will mostly be situated in transport centres such as rail stations.

However, Adrian Crean, the new managing director of the group, says it is now seeking a second partner for the German market to open Rocket’s in commercial shopping areas.

“We have held discussions with potential high-street franchise partners in Germany,” said Mr Crean, who was speaking after giving a presentation at the Retail Excellence industry expo in Citywest in Dublin, which attracted 2,000 delegates and 200 exhibitors this week.

Mr Crean, who used to run McDonald’s in the Republic, said Rocket Restaurants wants to strike franchise agreements across Europe for the Rocket’s brand in countries such as France, Spain, Belgium and the Netherlands. He said expansion into the UK is unlikely at the moment.

Rocket Restaurants owns and operates 22 of its outlets, the rest are franchises. More than 40 of the restaurants in its network are the Eddie Rocket’s brand, themed on a retro style US diner.