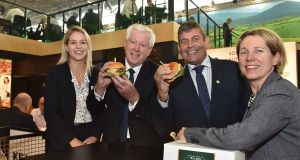 Irish meat-processing group Kepak has become the first European meat company to secure access to the US burger market, the largest meat market in the world with an estimated value of more than $122 billion (€111 million).

The approval allows Kepak sell its beef into the US fast-food industry, long regarded as the more lucrative end of the trade.

While several Irish processors have secured licenses to sell high-value steak cuts, such as fillet and rib-eye, into the US market since the lifting of the BSE-inspired embargo on European beef in 2015, Kepak is the first to secure one for mince, known in the trade as manufactured beef.

Mince for the burger industry accounts for the bulk of US meat imports, which totals more than one million tonnes annually.

Kepak is said to be pursuing several contracts in the New York and Boston areas through its US arm, the Celtic Beef Company. The meat for export to the US will be processed at Kepak’s plant in Ballybay, Co Monaghan.

US beef imports are subject to tariffs above certain volumes. Whether Kepak’s exports will breach this ceiling is dependent of the amount of business it secures.

The company said the USDA’s approval will mean “Kepak’s grass-fed, fully traceable and hormone-free” Irish beef is made available to the food service and retail sectors with distribution initially focusing on the New York and Boston markets. “We are delighted to be the first meat processor in Europe to attain USDA approval for the sale of our high-quality value-added beef burger patties into the US market,” said Kepak managing director John Horgan.

Mr Horgan said Kepak North America, the group’s sales and marketing office in the USA, has been busy growing the sales of our Irish beef since the launch of our Celtic Beef Company brand a number of years ago.

Also commenting on the deal from Anuga, the world’s largest food fair in Cologne, Germany, was Minister of State for food Andrew Doyle: “With Brexit on the horizon, the current environment for business is challenging, particularly for the beef sector, and developing and growing new markets is a key response to these challenges.”