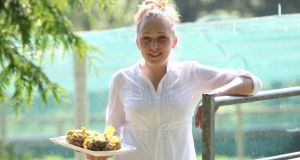 Eva Milka: “We decided to make a business out of it and got ¤15,000 from the Enterprise Ireland New Frontiers programme. Everyone thought we were mad, some still do.”

After returning from a holiday in France, where she developed a love for eating escargot, Eva Milka was very disappointed she couldn’t buy snails for consumption in Ireland.

The Polish national, who moved to Carlow from Czestochowa in southern Poland five years ago, missed them so much she decided to import some and breed them for her family and friends.

She initially set up her snail farm in the bedroom of a rented house, before finding suitable accommodation for a commercial venture at Garryhill in Co Carlow with her partner Lucas Kurowski. The venture – Gaelic Escargot – is currently Ireland’s only snail farm.

“Initially, we hadn’t a clue what to do so we consulted ‘Uncle Google’ to see how we could breed snails. We then spent a week with a huge producer in Poland to see how his business worked. Our first year was a disaster as we couldn’t buy certified snail food in Ireland so their shells didn’t develop. We also didn’t have netting over the field, so all the birds ate them.”

Despite the initial hiccup, she says the Irish climate is very suitable to snail production. After doing some market research, the two discovered there was a huge international shortage of escargot, especially in France.

Hibernated
“We decided to make a business out of it and got €15,000 from the Enterprise Ireland New Frontiers programme. Everyone thought we were mad, some still do.

“We imported 21,000 snails and each snail produces about 20 to 200 eggs at a time. The baby snails initially spend eight weeks in a polytunnel before being transferred to a field.”

The development of a snail follows a number of cycles: the first is the mating and egg laying stage, which begins in February, next comes the incubation and hatching of eggs. The infant snails spend up to eight weeks in a polytunnel before being moved to a specially adapted field, where they are fed a mixture of rape, beetroot and dried food.

For export, the snails are hibernated. This occurs as a result of refrigeration, or dropping the temperature to less than 5 degrees.

The couple hope to have one million snails or 10 tonnes ready for export come September, which they will send to a Polish distributor, who already supplies to the French market. They hope to do 30 tonnes the following year.

Helix Aspera Muller, the common garden snail found in Ireland, is growing in demand, especially from France and Italy, where there is a shortage of escargot. Demand in Italy averages around 194 million tonnes each year, while in France it is 115 million tonnes, she says.

“As we’re so new to the business, we don’t have any contacts with French distributors so are going through a established Polish one. We’re hoping to make contacts over the next year.”

While her current plans are to export all her produce, she would like to develop a market in Ireland, although she says many Irish people seem reluctant to try escargot which is such a delicacy abroad.